Incumbent Bratislava Mayor Ivo Nesrovnal running for re-election does not agree with the opinion that some parts of Bratislava are turning into no-go zones. 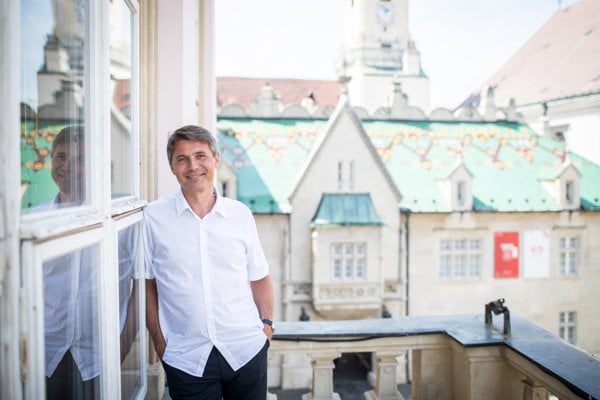 In this interview, incumbent Mayor Ivo Nesrovnal running for re-election talks about:

-why he is running for re-election

-how to inspire people to register their permanent residence here

-whether he perceives Bratislava as a safe city

Bratislava is better off and what it needs now is to continue with already started changes, incumbent Bratislava Mayor Ivo Nesrovnal says. This is why he is running for re-election.

Ivo Nesrovnal (IN): Everything. But I prefer walking since I live within walking distance. Also in the other cities in which I used to live, I always wanted to live within walking distance since I hate being dependent on a car. I also have a one-year public transport pass and take a tram or trolleybus when I need to get somewhere farther. Of course, I use bikes from the bike-sharing scheme we launched recently.

IN: These are problems which also affect other cities. These are transport, construction and cleanliness. But the situation in Bratislava is improving. We have begun many projects in Bratislava that now need to be completed.

TSS: What are the main topics of your election programme?

IN: The main topic is to complete the changes we started during my mayoral term. With regards to transport, we made it possible to travel by train in Bratislava. But to make it truly work we need to put Filiálka, a discontinued rail station at the very centre of Bratislava close to Trnavské Mýto, into operation again. We need to continue extending the tram lines up to Podunajské Biskupice, Devínska Nová Ves, Vajnory and to the end of Petržalka. It is necessary to repair existing tram lines. It is necessary to complete the reconstruction of all 10 arterial road and continue with the building of cycling paths.

In terms of other things, it is necessary to continue increasing the capacities of senior homes, kindergartens and the repairing of public spaces. Bratislava is an extensively green city, while we want to advance care and protection of greenery in the city to a new, higher level. Our aim is to extend the degree of protection in the municipal forest company Mestské Lesy v Bratislave to the remaining forests around Bratislava.

I also want to launch a permanent stage at the P. O. Hviezdoslav Theatre and restore the Michal’s Tower, the last remaining tower of the historical city walls.

TSS: Bratislava does not have a special statute of a capital city. What do you think

IN: I pointed out this problem even when I was serving as Bratislava councillor and before I became the mayor of Bratislava. I compared the incomes of cities like Vienna, Prague and Brno and found out that Bratislava receives a smaller amount of money than it should. One of the problems really is that the state does not supervise how many people live in Bratislava without permanent residence here and so Bratislava does not receive a portion of their income tax. And this number is really high.

One solution I have proposed is preferred parking for residents. Those who do not have permanent residence in Bratislava will have to pay several times more. All necessary documents and regulations have been already adopted while only one last vote is needed. But a group of councillors boycotted it and the city is paralysed.

TSS: Do you think that preferred parking would be enough?

IN: It makes a difference if you have to pay €1,000 or just €100. Plus, permanent residents have easier placement for children in kindergarten and elementary schools and better access to medical, daycare and other services. Moreover, Bratislavans are entitled to the Bratislava city card, through which they enjoy discounts on city transport as well as tickets to the zoo, swimming pools, etc.