Slovakia should prepare for hard Brexit

Hard Brexit will be a worse scenario for Slovakia, but the country will be able to cope with it, Slovak PM said. 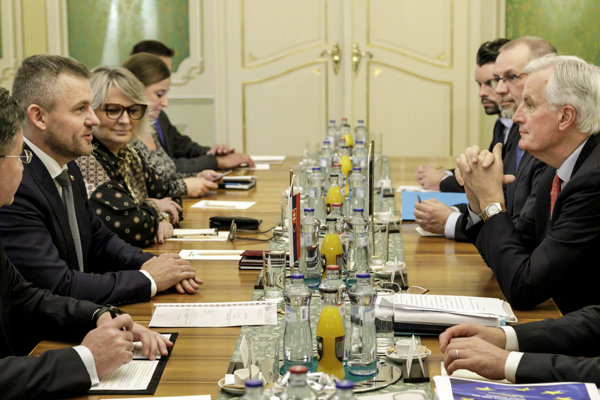 The Brexit deal is not completely prepared since the question of the Irish borders has not been resolved, European Chief Negotiator Michel Barnier and Slovak PM Peter Pellegrini agreed at their meeting in Bratislava on November 6, the TASR newswire reported.

“The situation regarding the border between Ireland and Northern Ireland remains a sensitive issue because it is in the interest of EU member states to protect the single market and its freedoms valid within it,” Pellegrini said, as quoted by TASR.

London and Brussels want to prevent border checks at the future EU border between Ireland, an EU member state, and Northern Ireland, which will remain part of the UK after the country leaves the Union. Brussels also fears that unrest could occur in case a border is introduced.

The ongoing Brexit negotiations are “very negative” and the deal will bring no benefits to any of the sides, Barnier said at the press conference in Bratislava. He stressed that a backstop is needed to secure the integrity of the internal market and of Ireland.

“It is in our interest to defend the interests of EU citizens – our citizens, our firms and integrity of the internal market and its four freedoms, which are our biggest wealth,” Barnier added, as quoted by TASR.

The Slovak government will have to intensify its steps in case the UK leaves the EU without any deal, said Pellegrini. He underlined a possible impact on industry, the situation of Slovaks working in the UK, and relations in railway and air transport between Europe and Britain.

A hard Brexit will be a worse scenario for Slovakia, but the country should cope with it for its good economic development and low unemployment, Pellegrini said. An expert group is working on an analysis of likely effects on individual segments of Slovakia’s economy and society under both, deal and no-deal, scenarios.