The office building’s sale is one of the biggest real estate transactions this year. 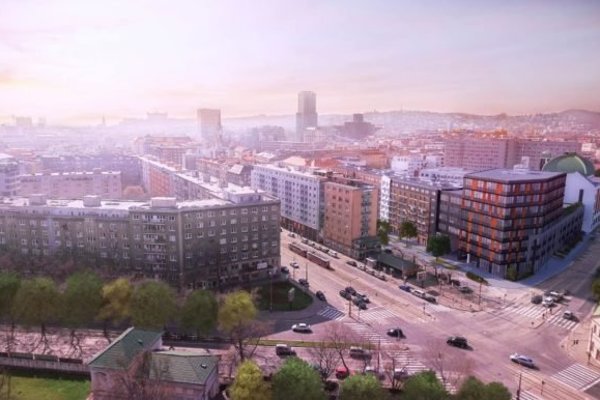 New Stein, an office building recently built on the former Stein brewery premises in Bratislava has a new owner. MiddleCap Real Estate Ltd. sold the building to Prvý Realitný Fond managed by IAD Investments. Even though they did not reveal the price, the companies claim that it is one of the largest real estate transactions in Slovakia for 2018.

“The fact that we have managed to close the transaction, meaning the sale of the building, within a relatively short period of time – less than 10 months from the final building approval – clearly speaks about the high standard of the project,” said Matúš Výboh, chairman of the board of directors of AMW Development, as cited by the Hospodárske Noviny daily. AMW Development is an affiliation of MiddleCap Real Estate, which designed and built the office building.

The office building stands at the crossroad of Krížna and Legionárska Streets with more than 12,000 square metres of administrative and commercial space. The first tenants moved in in March 2018. At present, the largest tenants include Deutsche Telekom Services Europe and the Lucron Group.

The change in ownership is accompanied by efforts to revive the history of Krížna Street, known as Steinerka in the past. Thus, the new owner changed its name from New Stein to Steinerka Business Center.

The project and subsequent development of the building was realised by MiddleCap Real Estate Ltd. through its subsidiary AMW Development. It purchased the site from YIT Reding at the end of 2015 for construction of administrative and commercial premises.

The office building is part of a new development built on the premises of the former Stein brewery. The developer bought the land from YIT Reding in 2015 with the aim to build an office building on it. YIT Slovakia built a complex of apartment blocks on the rest of it.