Slovak officials: We need to stand by Ukraine

Steps leading to the escalation of tension in the annexed Crimea undermine the security and stability in the wider region, Foreign Ministry stated. 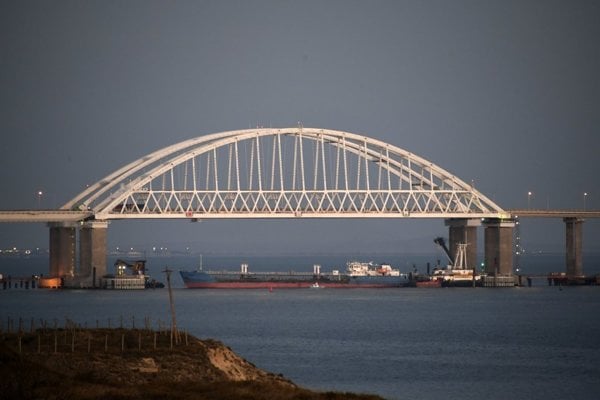 Russia tried to block the Kerch Strait on November 25 by positioning a ship under the bridge. (Source: AP/TASR)
Font size:A-|A+44

Slovakia's Foreign Ministry has called on Russia and Ukraine to avoid a further escalation of tension in its official reaction to the situation in the Sea of Azov and in the Kerch Strait, where Russia shot at and seized three Ukrainian boats on the morning of November 26.

"Steps leading to the escalation of tension in the annexed Crimea, in the Azov and Black seas, violate the sovereignty of Ukraine and undermine security and stability in the wider region," the ministry stated and expressed "serious concerns" over the rise in tensions.

Slovakia supports the sovereignty of Ukraine

Slovakia does not recognise the annexation of Crimea and supports the sovereignty of Ukraine and its territorial integrity within internationally recognised borders.

"We, therefore, call on the Russian Federation to allow free access through the Kerch Strait and to the Ukrainian ports on the banks of the Sea of Azov in line with international law," reads the statement released by the ministry on November 26.

The ministry stressed that Slovakia is due to take over the OSCE presidency come January and the situation in Ukraine will be one of the presidency's priorities.

Kiska and Pellegrini are concerned

President Andrej Kiska considers the increasing tensions in the annexed Crimea and in the Sea of Azov unacceptable, according to his spokesperson Roman Krpelan.

PM Peter Pellegrini wrote on Facebook that he has been concerned about the information coming from Kiev, such as that about martial law, not just as part of the international community but also as a direct neighbour of Ukraine.

"This is not good news," Pellegrini wrote and expressed a wish that the situation would calm down.

"Nobody wants an armed conflict and it is necessary to do everything on the diplomatic level to preserve peace in Europe," Pellegrini wrote.

A new dimension to the war in Ukraine

Of the ruling coalition parties, only Most-Híd reacted through its state secretary (deputy minister) at the Defence Ministry, Robert Ondrejcsák, who in his Facebook status earlier in the day accused Russia of dramatically escalating the conflict with Ukraine, following the illegal annexation of Crimea and military operations in the east of Ukraine.

"The war thus acquired a new dimension," Ondrejcsák wrote and added that he hopes this will "wake to reality" the people who "still dream of the eternal friendship with Moscow or about building 'bridges' between east and west".

Ondrejcsák has repeatedly clashed with the nominees of the ruling Slovak National Party (SNS) that controls the ministry based on the Coalition Agreement. The SNS leader, Parliament Speaker Andrej Danko, has repeatedly met with Russian representatives and advocated lifting Russian sanctions.

In the wake of the recent incident, only SNS MP Jaroslav Paška has reacted so far, labelling it an "unpleasant event", as quoted by the TASR newswire. He stressed that an independent investigation should show whether it was intentional on either side.

We stand by Ukraine

Most-Híd's Katarína Cséfalvayová, who heads the parliamentary foreign affairs committee, also labelled the incident in the Sea of Azov as another act of Russian aggression and stressed that Slovakia, the EU, and the international community need to stand by Ukraine.

"Escalation of tension is sad news for the global community," she said as quoted by TASR.

Opposition Freedom and Solidarity (SaS) stated through its MP in the foreign affairs committee, Martin Klus, that Russia has no right to prevent the access of Ukrainian ships to the Sea of Azov shores and ports. He called for observation of the Minsk Agreements, TASR reported.

It could happen to any country

Slovak analyst Alexander Duleba from the Slovak Foreign Policy Association (SFPA) think tank believes that the situation is a Russian attempt to show that they control the Sea of Azov despite the 2003 agreement that says that all ships flying the colours of Ukraine and Russia can move in the waters of the sea freely.

"It is a clear violation of this agreement," Duleba told the Sme daily and explained that, in his opinion, Russia is trying to limit the strategic importance of Mariupol and close the sea to commerce.

Duleba expects stricter and wider sanctions against Russia as a response from western countries.