The government approved the document and plans to end coal mining in the Upper Nitra region by 2023 instead of 2030.

“We will not threaten Nitra in terms of the socioeconomic situation and at the same time, we will ensure energy security for people,” Economy Minister Peter Žiga (Smer) said, as quoted by the private news channel TA3.

The document was prepared by the Government’s Office, the Economy Ministry and the Hornonitrianske Bane Prievidza (HBP) mining company.

However, environmental activists from Greenpeace are critical of the approved document. It does not mean a decline in coal mining in Slovakia, the organisation claimed in its press release.

“The document is far from the end of coal mining and incineration in Slovakia,” said Júlia Sokolovičová from Greenpeace in a press release.

The Club 500 organisation, which unites the biggest employers hiring 500 employees and more, considers the document a good step. 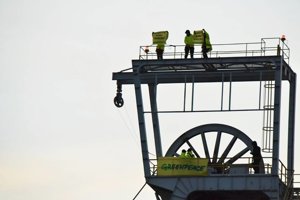 It's best if the proposal does not set a fixed date for stopping coal mining, but rather enables it to end sooner. Club 500 believes that coal mining and the subsidies will end as soon as possible since every year represents €115 million in savings for end customers, it wrote in a press release.

“Regarding the employment in this region, we’re convinced that people from Upper Nitra will easily find jobs since the employers in this region struggle with the lack of labour force,” Club 500 wrote in the press release.

Greenpeace activists claim that the Čáry mine, owned by the HBP, will remain open without restrictions. The other mines owned by the company are due to close in 2027.

Moreover, another mining project is due to start in the Nováky mining area, which would make coal mining last longer in the region, until 2034, Greenpeace claimed.

“The government’s document is not a dignified basis for the transformation of Upper Nitra, but a plan to secure the profit of a private mining company,” Sokolovičová said.

In the October survey carried out by the Median SK polling agency, 80 percent of Slovaks said that PM Peter Pellegrini should support the transformation of the Upper Nitra region into a region of renewable energy.