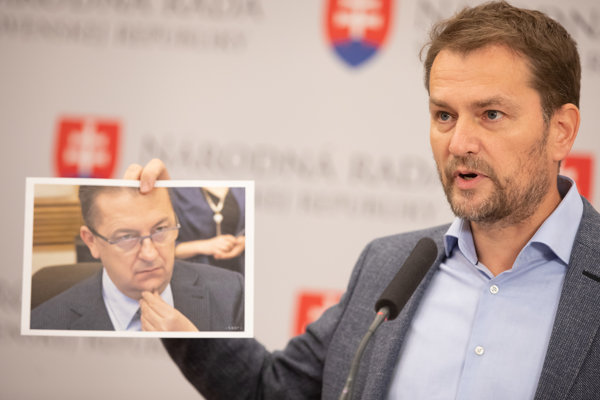 Alena Zs., the woman who faces charges in the Ján Kuciak and Martina Kušnírová murder case, has communicated with several influential persons over the past few years, the Denník N reported in mid-January, citing sources connected to the investigation. The investigators learned about her contacts from her mobile phone and computer.

Prosecutor René Vanek was one of the people who maintained contact with Alena Zs. on Facebook. As a result, he stepped down from his post of the deputy general prosecutor on January 15.

"It was a big mistake, which I have paid for. It was a mistake to chat with someone I didn't know," said Vanek, as quoted by the Sme daily.

Denník N also reported about contact between Alena Zs. and the head of the opposition Sme Rodina movement, Boris Kollár (who admitted to having known her soon after she was detained), the Bratislava Regional Governor Juraj Droba, Parliament's Speaker Andrej Danko and prominent Smer politician and deputy parliament's speaker, Martin Glváč.

Glváč has reportedly met her

Opposition Ordinary People and Independent Personalities (OĽaNO) MP Igor Matovič called on PM Peter Pellegrini to dismiss Glváč from his post as deputy parliamentary speaker and from his chairmanship of the Smer caucus due to his contacts with Alena Zs. Glváč denied any such contact and said he would file a criminal complaint against Matovič, claiming that there was an "organised group" at work around Matovič, whose aim is to cover up the fact that Daniel Lipšic, former prominent conservative politician and now attorney for the Kuciak family, dated Alena Zs.

"I have taken Mr Glváč's statement into consideration and I want to hear from him personally," PM Pellegrini reacted, as quoted by Sme.

Glváč at first denied any contact with Alena Zs., but changed his tone after Sme reported on Alena Zs.'s testimony, given to investigators on November 16, 2018, during which she admitted to having exchanged text messages and pictures with Glváč and said he was the only one of the politicians she communicated with that she also met in person, at least three times.

Denník N and the Tvnoviny.sk website later published selfies (including ones from parliament) that Glváč sent to Alena Zs. during their conversations which, according to media reports, lasted until shortly before she was detained and charged with participating in the preparation of the Kuciak and Kušnírová murder in September 2018.

In his January 20 reaction for the media, Glváč stated that he was "probably the only one of those she addressed" to report the contact to the respective authorities and who proceeded based on their recommendations. The deputy parliamentary speaker alleges that his communication with Alena Zs. took place "through third persons and in coordination with them", which is why he does not consider it personal.

Glváč also insisted in his statement that it is a lie that he met with her in person, and said that he considered this a smear campaign against him.

"Even though contact, including personal, between other persons with A. Zs. has been reported in the media, Sme has covered this up in the story it published and is helping to spread lies and conspiracies about myself," Glváč concluded.

Sme, in turn, insists that they wrote about all the politicians Alena Zs. has been in contact with.

After she was detained, Alena Zs. was reported to have had a close relationship with Marian Kočner who has also been in custody since mid-2018 for economic criminality.

Meanwhile, Denník N also reported that, based on the testimony of Zoltán A,. another one of the four persons currently in custody in connection with the Kuciak and Kušnírová murder, he and Alena Zs. assisted Kočner in scrapping the documentation of the Real Forum Invest Company co-owned by Ladislav Bašternák. The company built the Bonaparte apartment building, where former PM Robert Fico rents an apartment from Bašternák.

Bašternák denied the claims for Denník N, while the police confirmed they are dealing with the information.