Coaches of both teams condemned such behaviour. Punishment awaits Slovan. 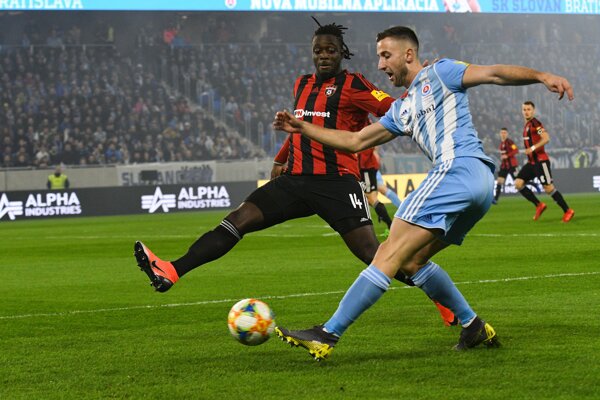 The very first match at the new National Football Stadium was held between the local football club Slovan Bratislava, which returned to Tehelné Pole after nine years, and Spartak Trnava. Slovan won 2:0.

However, there was a moment when after one hour of the match, Slovan’s fans started to shout racist comments at Myenty Abena, a native of Surinam and player of Spartak Trnava, after a skirmish with Andraž Šporar from Slovan.

The disciplinary committee of the Slovak Football Union will now deal with the racist comments, the SITA newswire reported.

“I noticed and I considered it to be very unfortunate,” said Michal Ščasný, coach of Spartak Trnava, as quoted by the Šport.sk website.

Slovan also has a darker skinned player and he considers these comments to be “sick” and disrespectful, he added.

Even though Martin Ševela, the coach of Slovan Bratislava, did not notice the racist comments, he has a clear attitude toward such behaviour.

“I didn’t notice it, probably I was really into the match and I heard it for the first time,” Ševela told Šport.sk. “If it happened, I condemned it.”

Such behaviour does not belong in the stadium, Ševela said. They all want to fight against racism, fascism and similar outbursts, which they do not want at the stadium. They also want families with children to attend the matches and enjoy it.

Miroslav Vlk, head of the Slovak Football Union’s disciplinary committee, said that Slovan can be punished.

“If they are proven to be guilty, the club will be punished because of its fans,” Vlk told Šport.sk.

The punishment will be either a fine or ban on fans traveling to ‘outer’ match or one home match without fans. The closing of the stadium for one match is also possible, SITA wrote.