The EPP argument that the party does not want to punish the Hungarian people simply won’t stand. 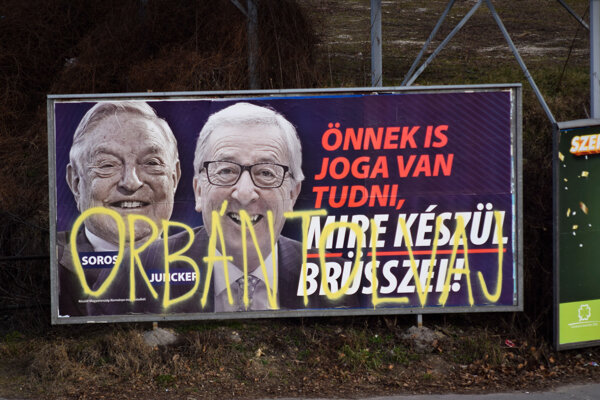 A billboard from a campaign of the Hungarian government showing European Commission President Jean-Claude Juncker and Hungarian-American financier George Soros with the caption "You, too, have a right to know what Brussels is preparing to do." is displayed at a street in Budapest. (Source: AP/TASR)
Font size:A-|A+7

The European People’s Party (EPP) should no longer pretend that Orbán is a proverbial prodigal son who will return to democratic values if reproached frequently enough.

The Visegrad region message for EPP boss Manfred Weber has been pretty clear for years: Orbán will not return to democracy. Instead he is dismantling democracy and his so-called illiberal ambitions are already crossing the borders of Hungary.

Orbán has been inspiring autocrats of all kinds: he has encouraged them in undermining the rule of law, inspired them to ignore international criticism and has authored a guidebook on suffocating critical media. Orbán has become a political brand that petty autocrats are ready to follow.

How far should a leader of an EU member state go in dismantling democracy for his political family to say: we shall no longer provide a cover-up for you in the eyes of your own voters?

The EPP arguments saying that the party does not want to punish the Hungarian people simply won’t stand. The prime minister of Hungary does not want to leave the EU even if chased by dogs to its borders. Despite his years-long anti-Brussels propaganda, Hungarians remain pro-European.

Orban draws legitimacy from the indecessiveness of Weber’s party and gradually demoralises the party itself. He gives the EPP new definitions. For voters in many countries it is now a party that cannot handle Orbán’s thirst for power and puts party interests above democratic values.

The conspiracy campaign featuring the faces of George Soros and Jean-Claude Juncker isn’t a bad joke or an overdone PR gig. It is a clear signal that Orbán has elevated conspiracy to governmental doctrine using the language of the thirties. Why would the EPP want to carry this baggage?

Read more articles by the topic
This article is also related to other trending topics: George Soros