Foreigners and refugees featured in the stories hope that the comic book will help Slovaks learn more about their lives and understand them better. 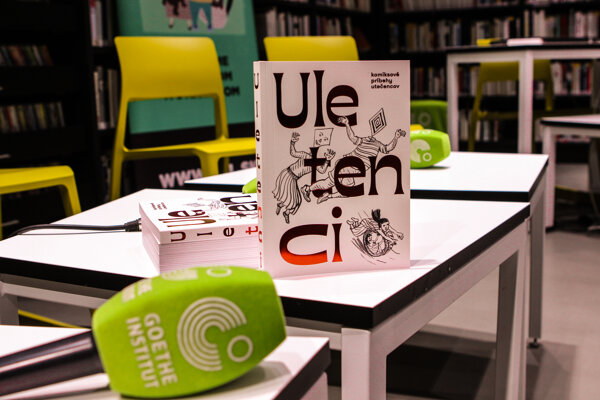 Faisal meets some boys in front of the school. Even though they first make fun of him, saying that he is too old to attend school, they later become friends and Faisal tells them how he used to fly kites back home in Afghanistan.

The story of Faisal Ahmed Kamali is one of the five stories of foreigners living in Slovakia, who had to escape from their home countries to save their lives, described in the comic book Uletenci (Far-Outs). Issued by the Human Rights League (HRL), it should enable children, and adults, to peek into their lives, find out why they had to flee and how their lives go in Slovakia.

“I wanted to describe my life and how I lived, so that people will know me better,” Faisal told The Slovak Spectator.

Khadra Abdile from Somalia, whose story is also featured in the comic book, is probably the best known refugee living in Slovakia. She has been openly talking about numerous attacks against her and received the White Crow award in 2016. She said that she wanted to write a book about her life. This is why she did not hesitate to work on the comic book by HRL.

“I would like everyone to know why we are here and how we grew up,” she told The Slovak Spectator.

Apart from Faisal and Khadra, the comic book features the stories of Naima Ahmed Abdi from Somalia, Simon from Ethiopia and Mohammed from Syria. Through engaging and authentic stories it describes two parts of their life: before and after they came to Slovakia. The characters often remember their childhood and various entertaining moments.

However, the stories also contain a more serious element, particularly when explaining why they had to flee from their homes.

The comic book is illustrated by Daniela Krajčová, while the stories are written by Katarína Marinová and Katarína Fajnorová. They all have been working with refugees and organising various activities for them for years.

The first idea to start with a similar project arose in 2015, after the migration crisis broke out and brought up several heated debates about refugees.

The process lasted altogether three years and had various phases. One of the most difficult was to execute the idea, Krajčová said. Creating the stories was also a challenge since they wanted to make them both understandable and interesting, she admitted.

The selection of people whose stories would be featured in the comic book was very spontaneous. The authors met them at various informal events, said Marinová.

The interviews required time and some were tired after a while and wanted it to be over, Marinová said. However, they all were very nice and willing to cooperate, she added.

Presenting stories in an interesting way

Since the comic book is first of all designed for children, the authors often used fantasy to describe some moments, particularly those that had to be made interesting for children. There are often fictional characters talking with the heroes, which provides readers with many interesting facts, Marinová said.

“We were always trying to keep the most important facts authentic,” she explained. This concerned mostly the characters’ pasts and their current problems.

The authors of the comic book have various plans for the future. They want to address primary and secondary schools, as well as cultural institutions in the Bratislava Region and offer them workshops for pupils, where they could meet the heroes from the book.

If possible, Krajčová would also like to continue in issuing more comic book, presenting the stories of more foreigners and refugees living in Slovakia.

“We think that adults, as well as children and youth, belong to the generation comprising contemporary society, should learn about this topic,” Krajčová told The Slovak Spectator.