V4 parliaments' speakers: Closer cooperation is beneficial for both countries and the EU

Speakers of parliament from V4 countries explained their view on the functioning of the EU to their Benelux colleagues in Piešťany. 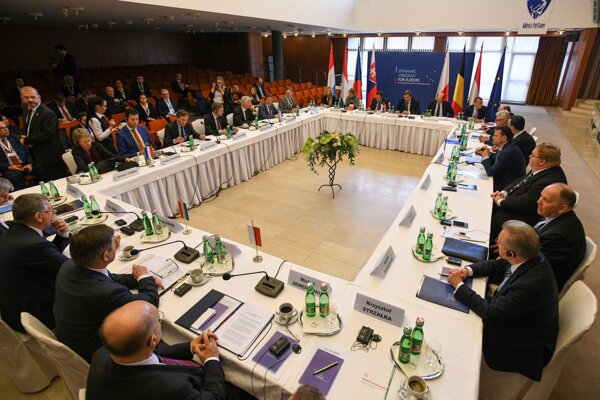 The speakers of the parliaments of the Visegrad Group (V4) countries and the Benelux met on March 25 in Piešťany (Trnava Region). They stressed the need for dialogue and closer cooperation during the meeting.

The idea of closer cooperation when pushing through some of the ideas is beneficial not only for the countries themselves but also for the EU, they noted, as reported by the TASR newswire.

“It was a day full of knowledge, learning, answers and also overcoming the problems that arise with some of the topics due to bad communication,” said the host of the event, Speaker of Parliament Andrej Danko (SNS), as quoted by TASR.

The V4 is interested in making the EU more dynamic, to reform it and introduce its own attitudes, Danko added. He was also appreciative that after the meeting with the representatives of the French and German parliaments, he had a chance to meet the representatives of the Benelux countries, including the president of the Benelux parliament, Gusty Graas.

“Our countries can learn much from them,” said Danko, as quoted by TASR, “I paid tribute to the Benelux countries for what they have done for the EU.”

All participants were glad of the opportunity to talk about issues that are usually not discussed much.

The importance of enlarging the EU with the Balkan countries is not debated much in Benelux, said Siegfried Bracke from the Chamber of Representatives of Belgium. The meeting in Piešťany helped him understand this topic better, he added.

“I also understood why some countries talk about unequal treatment,” Bracke said, as quoted by TASR.

The strength, legitimacy and usefulness of the V4 was shown during the meeting in Piešťany, said Czech Speaker of Parliament Radek Vondráček.

“It would be hard for our countries to organise such a meeting on their own,” he said, as quoted by TASR. “As we see here, the V4 is a good partner, since we represent 65 million of people.”

It is important that the participants of the meetings agree to summon another session this year, Vondráček added.

The participants also discussed the need to strengthen the position of the national parliaments. It is important that national parliaments have strong voices and representation, Graas said. However, this should not weaken the power of European Parliament.

Speaker of the Hungarian National Assembly, László Kövér, said that “we heard various opinions about the way to the solution and it is important that we are familiarised with the opinions of the other party”, as reported by TASR.