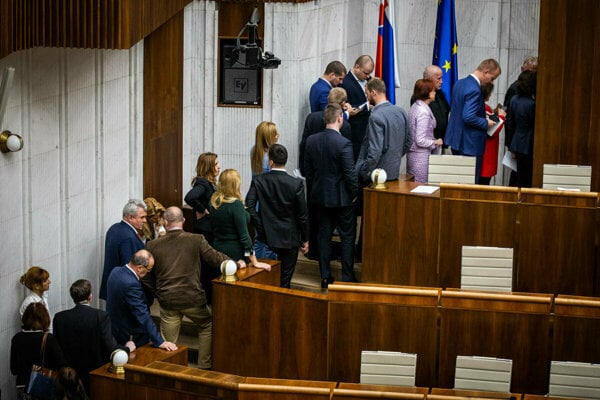 Parliament has failed yet again to elect the 18 candidates for Constitutional Court judge, from which President Andrej Kiska is expected to pick nine to fill the posts that were vacated in mid-February.

MPs elected only six candidates in the April 3 vote. The second round will take place on April 4, at 17:00, the Sme daily reported.

The Constitutional Court currently has only four judges who decide on cases: Jana Baricová, Miroslav Duriš, Jana Laššáková and Mojmír Mamojka. The current situation is making the court dysfunctional.

The plenum, which decides on, for example, the constitutionality and legality of elections and laws, could not be formed.

Although the coalition reportedly agreed to elect eight candidates, only six eventually got through. Candidates Miloš Maďar and Pavol Malich did not receive enough votes, Sme wrote.

The senior ruling party Smer does not know why that happened, claiming it was a coincidence.

“I do not know,” said Smer MP Miroslav Číž, as quoted by Sme. “There was a deal, which we did not completely stick to.”

Some Smer MPs are alleged to have had an issue with the two candidates not voted through, according to Sme.

Kiska has criticised MPs for not doing their job. He will now have to decide whether he will appoint some of the elected candidates, as his term of office ends on June 15. It is likely that Zuzana Čaputová will appoint the rest, Sme wrote.

The Constitutional Court is becoming a party body, said Igor Matovič, chair of the Ordinary People and Independent Personalities (OĽaNO). His party did not support any of the elected candidates, Sme wrote.

“We believe that parliament will approach the protection of citizens' rights responsibly and elect the remaining candidates for Constitutional Court judge on April 4,” Via Iuris wrote in a statement.