Trade barriers between Slovakia and Japan should be removed, the PMs agreed. He also met with his counterparts from the V4 countries. 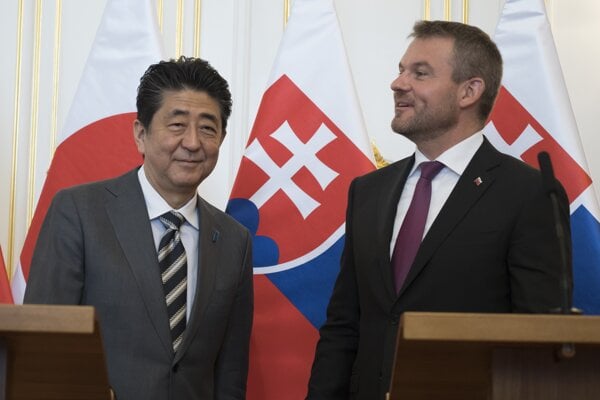 Japanese PM Shinzo Abe visited Slovakia for the first time and met with his Slovak counterpart Peter Pellegrini. The two discussed the possibilities of making Japanese companies’ investments in Slovakia more intensive, as well as agreements to remove the trade barriers between the countries and the situation on the Korean peninsula.

“The quality of Japanese investments in Slovakia is increasing,” said Pellegrini, as quoted by the SITA newswire. “They are not only production plants anymore, research and innovations have also moved here.”

Pellegrini welcomes this as Slovakia desires to be a modern, dynamic country that supports development, research and innovations.

Another motivation for the development of the trade relationship is represented by an agreement on social security that comes into force on July 1.

“We expect to lower the burden for companies,” said Abe, as quoted by SITA. “We have found out recently that the Slovak company ESET is investing in Japan, creating a branch there. That is one of the ways to deepen relationships.”

Moreover, they talked about the possibilities of closer cooperation in economic questions and the regulation of digital technologies.