Nine parties would make it to the parliament. What would the coalition look like?

The coalition of Progressive Slovakia (PS) and Spolu would receive the same level of support as the far-right People’s Party – Our Slovakia (ĽSNS) of Marian Kotleba. 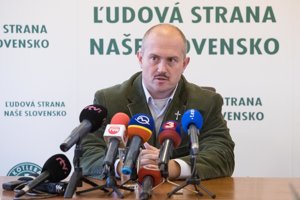 Read also:What could the new parliament look like? Read more

This is the result of the latest poll carried out by the AKO agency between May 8 and 10 on 1,000 respondents.

The election would be won by the current senior ruling party Smer, supported by 19.2 percent of the vote. Next would be the coalition of PS and Spolu and ĽSNS, each with 13.6 percent support.

Nine parties in the parliament

Fourth on the list would be Freedom and Solidarity (SaS), which would win 13.5 percent of the vote. It would be followed by Sme Rodina (We Are Family) of Boris Kollár with 9.9 percent, the Slovak National Party (SNS) with 8.2 percent, the Christian Democratic Movement (KDH) with 7.4 percent, the Ordinary People and Independent Personalities (OĽaNO) with 6.7 percent, and Most-Híd with 5.1 percent.