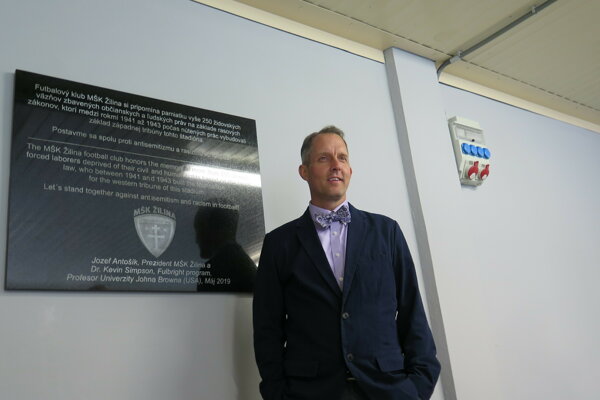 Passing through the northern-Slovak town of Žilina, travellers on trains on the route linking Bratislava and Košice notice the city's football stadium. Its concrete construction, hardly the most interesting landmark you can see against the backdrop of the magnificent mountains surrounding the city, fails to reveal an intriguing fact of its own history: the stadium's western grandstand was built during World War II by more than 250 Jewish forced labourers from the Žilina labour camp.

After Kevin Simpson, an American professor of psychology from John Brown University in Arkansas, who currently teaches at Bratislava's Comenius University as a Fulbright programme fellow, learned about the history, he decided that this historical fact deserved to be commemorated at the site.

On May 15, 2019 Simpson and Jozef Antošík, President of the football team MŠK Žilina, uncovered a memorial plaque on the stadium's western grandstand, to remind all passers-by of the labourers deprived of their civil and human rights under the wartime Slovak state's racial laws.

“This is the first plaque in all of Slovakia to link sports history with this wartime history,” the authors of the plaque believe. 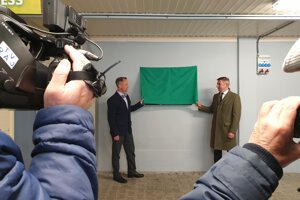 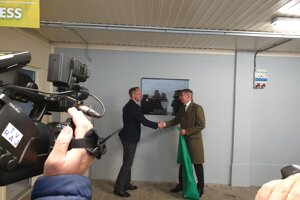 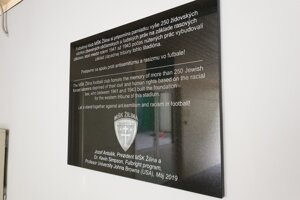 Similar memorial plaques were recently installed by the Italian Serie A clubs FC Bologna and AC Milan (in 2012 at San Siro Stadium) to honour their one-time legendary coach, Arpad Weisz, who was murdered in Auschwitz.

From Arkansas to Žilina

Simpson first learnt about the Jewish labourers who worked on the Žilina football stadium in the Encyclopaedia of Camps and Ghettos. There is a brief listing for the “Žilina Work Center”, which was open for about three years between 1940/41 and 1944.