How to bring up better citizens than us

We need to teach our children what it means to be a citizen while we are learning ourselves. 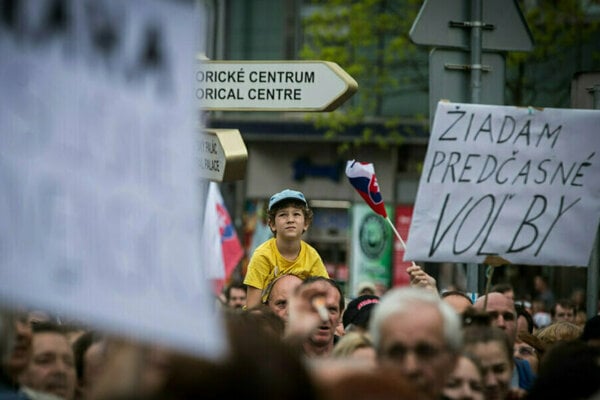 "You've got Martina Kušnírova there," a four- or five-year-old kid tells me at the playground. He is pointing at the badge I'm wearing on my jacket, the one I haven't put away yet since last year.

"Do you know her?" I ask the child, surprised. He just nods, swishes away, towards the other side of the rope track.

The exchange with someone else's child brings me back to last spring, that cold March. My own kids were with me at one of the protests, rather intimate, compared to the crowd of tens of thousands that gathered in the capital.

We stood near the Trinity statue at Trnava's central square, lighting candles. My six-year-old asked me there and then why we even came and, I admit, I was hardly ready to answer.

At that point, I had been through tough days filled with work rather than with family, and I had had no time to think about what I was going to tell my children about all this. Or I just convinced myself that they do not need to know what is going on beyond the walls of our house, or their kindergarten and all the safe spaces they know so well.

This is not a fairytale world

So I said something about bad people and good people. About how some are very, very bad, and they have now killed these two, a young woman and a young man. He was a journalist.

It seems like some bad people killed this journalist, because he wrote stories in which he wanted to tell everyone about how bad they were and what bad things they had done.

Writing for newspapers is one thing my preschooler knows about. And although he is not one to show what he is thinking, I can tell that me mentioning journalism while lighting candles disturbs him.

I'm not happy with my answer, I'm painfully aware that the good vs. bad dichotomy is not an exact way of looking at the world.

"Mummy, and why don't we catch the bad guys?" a logical question, another one that I have neither quick nor a well-thought answer to.