The restoration of the historic bell in Trnovo

For many years, the church choir in the village of Trnovo near Žilina owned a rare bell from the 1920s, but had no place to hang it and ring it. 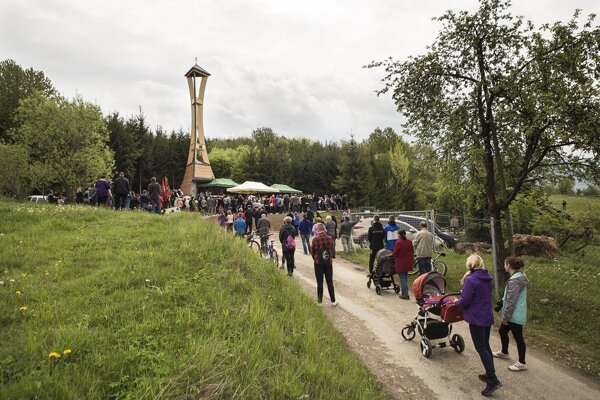 Over the nearby border with Poland, near the village of Rajcza, there were two 19th century stone chapels that required renovation.

On the basis of these facts, an initiative was created, the result of which is that on the Slovak side a new belfry of st. Florián, made of wood and stone was built from the Polish reconstructed sacred buildings. The bell was cast in Trnovo again in 1924. It‘s story began to be written down thanks to the predecessors who, during a difficult time, collected money for it‘s casting. The chapel with the bell stood on the grounds of the former Mayor Valenta Šenkár, but in 1977, after the chapel was demolished, the bell was still silent.

After years of waiting, its voice came to life again with the help of a microproject called Rozzvonme (RINGING OUT ONCE AGAIN) in Cross-border Cooperation with Poland - Slovakia between the Trnová Parish and Rajcza village.

Guests from the Polish community also attended the festivities on Saturday, 4 May this year, when the bishop František Rábek blessed the bell in the presence of local visitors, firefighters and tourists from the surrounding area. The volunteer fire department in Trnov took over the care of the work and promised to care for it, "that this place would not only be a reminder of the past, but also of all the hardships and troubles that the Trnovo people were afflicted with and which this bell also proclaimes."

In Slovakia, the unique bell tower with a chapel originated from the design studio of architect Ivan Jarin. The 19 meter high bell tower consists of three wooden pillars on reinforced concrete walls, converging in the middle and branching up to the bell. At the bottom is a chapel of worship that also houses the controls for lighting and tolling the bell. At it‘s heart is a sculpture of the protector and patron saint of all fire fighters st. Florián, from the workshop of Terchovský artist Alojz Mucha.

The main objective of the project was to raise the sacred cultural heritage of the region and increase its potential in terms of attraction for tourism.

Great credit for returning the bell and building the bell tower of st. Florián must be given to Trnová parish, as well as to the Urban Community in Trnovo, which has provided the land for the bell tower for a symbolic sum for the next 50 years. As the project did not cover all the costs, there were other donors who financed the other parts needed to complete the work.