Highlights from Day 2 of the GLOBSEC 2019 Bratislava Forum. 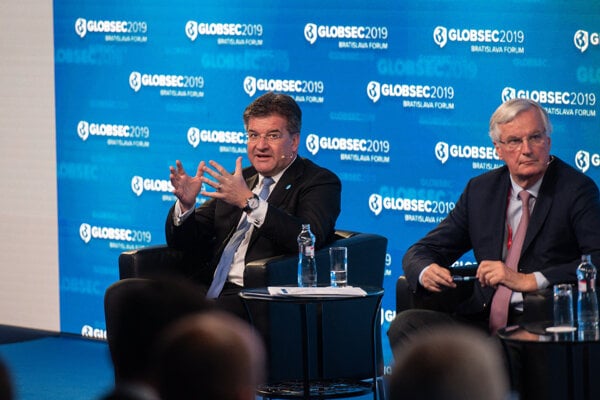 The European Union needs to be a stronger player, responsible for its own security, said Slovakia's Foreign Affairs Minister Miroslav Lajčák.

Speaking to the EU main Brexit negotiator Michel Barnier during the Globsec conference, currently taking place in Bratislava, Lajčák said that "we have started turning the strategic vision of the EU into reality", adding that the political will to increase security and defence integration in the EU is growing.

The Foreign Ministry also stated that Lajčák and Barnier agreed that stronger defence cooperation within the EU should not jeopardise the transatlantic partnership and the primary role of NATO in collective defence.

Lajčák and Barnier discussed Brexit as well and agreed that the best way for the UK to leave the EU is through the agreement that was made by the main negotiators in November 2018. If the UK opts for a hard Brexit, however, "we will respect that decision".

Lajčák and Barnier spoke on the panel Brexit and European Security on Day 2 of the Globsec conference.

"Brexit has been a great demonstration of European unity," Lajčák said. "If we can manage Brexit together, we can manage other issues as well."

A more fragmented political landscape in an increasingly uncertain world leads to various challenges for the EU. Its internal division undermines its credibility outside, especially in the context of the Enlargement and Neighbourhood policy, participants in the EU's New Political Landscape debate have agreed, as reported by Globsec.

Unexpectedly, this division resulted in an increased interest of European citizens in European issues, like climate change and the digital revolution.

Hungarian Foreign Affairs Minister Péter Szijjártó said the EU can only be strong if its individual member states are strong, the TASR newswire reported. The minister pointed to the good result of his Fidesz party in the EP election in Hungary and noted that the European People's Party (EPP) should be ready and open to cooperating with successful political parties on the right side of the political spectrum, TASR wrote.

Czech Foreign Affairs Minister Tomáš Petříček noted that the election campaign was dominated by issues related to the future of the EU rather than local affairs. These included migration and security.

Dzurinda insisted that it is possible to maintain the strength of member states and at the same time have strong and respected European institutions.

The debate also dealt with EU enlargement. The Czech minister is optimistic and sees several reasons why the EU should be open to accession talks with Albania and Northern Macedonia.

The presidents of Montenegro and Serbia, speaking to a panel on the Western Balkans on Day 2 of the conference, confirmed their countries' readiness and interest in EU membership.

Montenegrin President Milo Djukanovic said there is no other alternative for his country than the EU.

Serbian President Aleksandar Vucic also confirmed his country is preparing for EU accession, but they are also discussing a trade deal with the Eurasian Economic Union and are preparing to get licences to export cheese to Russia and Belarus, which is very important for Serbia, according to its president, TASR wrote.