Why Bratislava, friends were asking us

I immediately knew that I wanted to stay, says co-founder of Bratislava language school about his first impression of the city. 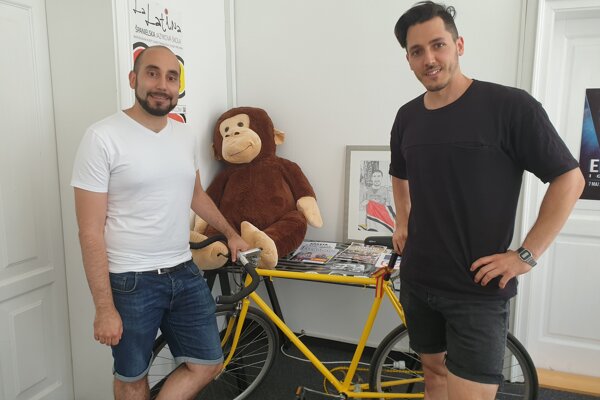 “Have you ever tried Spanish cuisine? And what was it?” With these words, though in Slovak, two men are approaching people in the streets of Bratislava.

These two men are Francisco de Borja and Daniel Martínez-Guillén. They are from Spain but they have been living in Slovakia for eight years. They came to do business here: they established a Spanish language school: La Latina.

“When we started we didn't have any money,” Martínez-Guillén told The Slovak Spectator.

They both sit in their office in Bratislava's Old Town where their language school is located. Besides the office, they have several classrooms here. Martínez-Guillén, 30, recalls that it all started with Erasmus.

They were two college friends from Zaragoza, studying law. When they decided to go for an Erasmus exchange, De Borja chose Florence, Italy, while Martínez-Guillén went for Bratislava. During the year abroad, they agreed, together with another friend who was staying in Ireland, to meet in the middle – Bratislava.

De Borja, today 33, recalled that the city shocked him, but in a positive way.

“I immediately knew that I wanted to stay,” he told The Slovak Spectator. It was February 2011, they went out for the night.

“The idea to start the Spanish language school was born that night,” Martínez-Guillén told The Slovak Spectator. “I and Francisco were so enthusiastic about it that we really annoyed our third friend.”

Once their Erasmus stays were over, they met again at home in Zaragoza, but stayed only a couple of days.

“My parents came to pick me up at the airport,” Martínez-Guillén recalls. “When they didn't see my huge luggage, they got curious. Where is your other stuff, they asked.”

That was when he admitted he had only returned for a few days and was going to return to Bratislava to live and start his own business. His plan did not meet with great enthusiasm from his parents. They did not believe it would work out and assumed the aspiring entrepreneurs would be back in a few months' time. Neither were friends supportive.

"They thought we had gone insane," De Borja said.