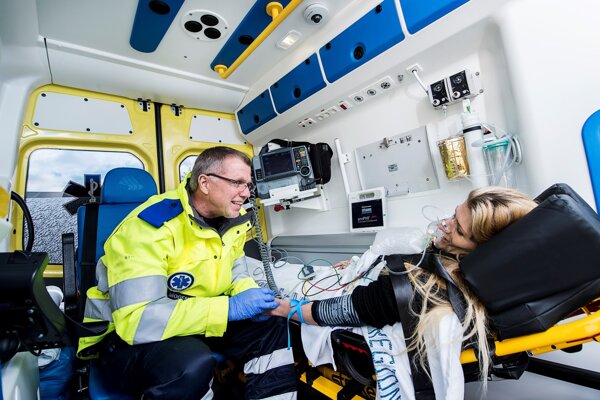 The Danish ambulance provider, Falck, which owned a 100-percent share in the Slovak emergency medical services firm, Falck Záchranná, between 2008 and 2009, will once again become its only owner after a decade, the Sme daily reported.

The unknown Czech company KPR Health Invest has decided to sell its 49.11-percent share in Falck Záchranná to Falck, a note in the business journal published by Slovakia's Antimonopoly Office (PÚ SR) reads, as quoted by the daily.

Falck Záchranná has been Falck's unit in Slovakia since 2005 when the firm won the tender for ambulance services. It operates 107 emergency medical service stations around the country, covering 39 percent of the territory.

The Slovak ambulance provider is changing hands at the time of the ongoing competition for new licences in 328 ambulance spots in Slovakia. It was announced by the Healthcare Surveillance Authority (ÚDZS).

Falck entered the Slovak market in 2005 alongside the Penta investment group. Penta left Falck three years later, and the Danish company Falck became the only owner of Falck Záchranná.

When licences for ambulance services expired in 2009, the Health Ministry announced a new tender. And Falck, surprisingly, sold a 49-percent share to the shell company Carterton Springs Healthcare, based in New Zealand. People from Juraj Široký's building company Váhostav managed the shell firm.

The shell company was represented by lawyer Daniel Futej, who works with and closely knows Slovak oligarch Juraj Široký. Some say Falck had to make this decision to obtain new licences at that time, as reported by Sme.

But when Slovakia adopted the anti-shell law in 2016, Široký had to get rid of his shell companies. Hence, Carterton Springs Healthcare sold its share to Czech firm KPR Health Invest, represented by Karel Matyska.

He lent money to purchase the share from Privatbanka, owned by Penta. He did not keep the firm's profit to himself but sent most of it elsewhere.

The actual owner of Falck Záchranná, however, probably did not change after KPR Health Invest bought the 49-percent share since Falck Záchranná's management changed only in part, as reported by Sme.

Matyska has worked with Futej to date. In addition, Futej and Penta co-owned the private insurer Dôvera in the past. And Futej's business partner, lawyer Radoslava Sláviková Geržová, has sat on the board of supervisors in both companies, Carterton Springs and KPR Health Invest.