The SIAF aviation festival is happening earlier than usual this year. The large AGROKOMPLEX exhibition is back, with additional eco festivals, and children can help out a dragon on their way to Mt Chopok. 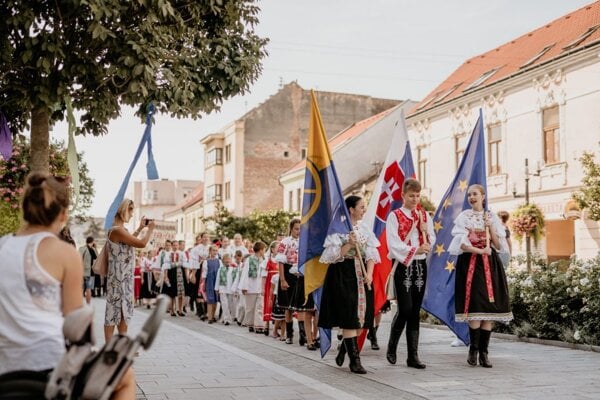 August 29, 2019. Slovakia commemorates the 75th anniversary of the Slovak National Uprising (SNP) this year. The national holiday falls on Thursday this year, in remembrance of one of the most extensive armed actions against Nazism in the 1940s. A great place to celebrate is in Banská Bystrica, where SNP celebrations take place every year and where the SNP Museum also sits.

But before the end of the month, August offers other types of events foreigners can enjoy in Slovak regions. How about heading up to Lomnický Štít observatory, which will hold an open door on August 3? It is, undoubtedly, a cool way to get chilled in summer. And here are other events to go to:

For years musician Oskar Rózsa has been promoting the music of his friend Marek Brezovský with his Projekt Hrana (Edge Project). Brezovský was one of the most distinct Slovak composers in the 20th century, composing classical and modern music. Slovakia marked the 25th anniversary of his death this June by several events, which continue into early August. Brezovský died of a heroin overdose at the age of 20 in 1994.

The Urban Tone platform in Piešťany brings the festival to the spa town's streets for the fourth time to promote different street art forms and create a space for different ideas, viewpoints, tolerance, and freedom.

The festival is open also to buskers passing through the city on August 3. In case of bad weather, the festival will take place in LAJFKY v Edene and ŽiWell only.

The ninth year of the biggest aviation event in Slovakia, the International Air Fest Days SIAF, will take place sooner this year, not at the end of the summer holiday but on the first August weekend. Participants from 13 countries will present their aviation skills. The 100th anniversary of the death of General Milan Rastislav Štefánik and the 75th anniversary of the Slovak National Uprising will be commemorated at the Sliač Airbase, as well. All the necessary information and complete programme can be found on the SIAF official website.

The 21st summer edition of the 4 Elements film festival comes back to Banská Štiavnica. This summer's theme is NUMBERS. Films of all kinds (animated, documentaries, experimental, feature) will be screened at local cafés and cinema, as well as in the open-air amphitheatre with a view of the whole city. Aside from film screenings, visitors can join lectures and debates with film professionals, as well as the field recording workshop (registration required). The children's edition of the festival will be going on simultaneously, which includes children's films and workshops. More information can be found here (in Slovak).

Place: Banská Štiavnica
Venues: cinema Akademik, amphitheatre, KC, Art Café, Banská Stanica, Kafe & Klub Spojár, Eleuzína
Date: August 7-11
Time: 10:00 – 00:00
Admission: €4.50 for adults & €2 for children (only screenings at Akademik) online or on site; other events are free. Visitors can also buy a cinepass for €25 online, which guarantees them a seat at film screenings and other events.

The popular wine event, during which wine lovers watch stars fall above their heads in the Pezinok vineyards, will be back on August 10. Up to 30 local winemakers, hearty food and sweet treats, a fire pit, an astronomical telescope, yoga by sunset and live music will be waiting for visitors. Funny Fellows and Medial Banana are just two of nine acts performing at the event. Do not forget to bring your own blanket! More information here (in Slovak) or on Facebook.

Place: Pezinok
Venue: vineyards near the Stará hora vineyard hill
Date: August 10
Time: 15:00 – late night
Admission: €19 if purchased online and €22 on site. The ticket includes 10 wine tasting tickets, glass, and a bracelet. More wine tasting tickets, €0.50 each, can be bought on site. Those who do not wish to taste wine pay an €8 admission fee. Children under 12 enter for free.

6) Dragon Path Up to Mt Chopok

Rumour has it that a treasure is hidden in the Demänovská Valley in the Low Tatras, guarded by a dragon. The fact is that the dragon, named Demián, is really friendly, and nobody has anything to fear from him. What is more, the little dragon needs your help. There are ten stops with ten different tasks to be solved. If you manage at least five obstacles, you will get a reward. More details are here.

Another adventure with Damián, this time at night, awaits children on August 17. The details can be found here. 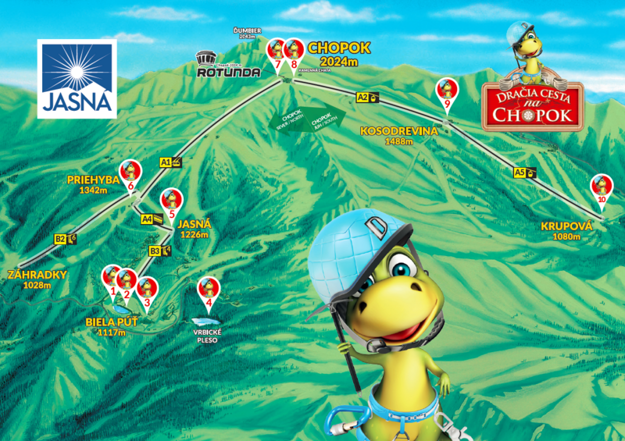 A rock music festival, promoting local and guest bands, returns to a medieval military camp in Stará Ľubovňa, in the north-east of Slovakia, on August 16. The Now, Zachovajte Paniku, Fictive Marry, and Massriot played at Muse Fest in 2018. In the following two days, visitors to the camp can enjoy watching knights on horses fighting in a tournament to find the best knight of all. Apart from enjoying medieval vibes, people can ride a horse and try a crossbow and longbow shooting. More details about the festival can be found here and about the tournament here (in Slovak). 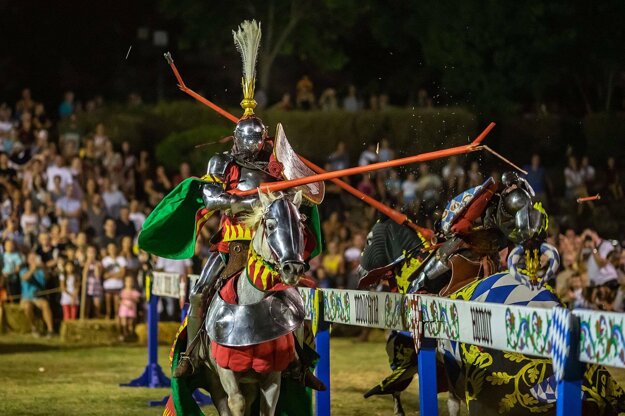 A knight rides a horse during the tournament. (Source: Agentúra Hector)

The city of Trnava will host the 18th edition of the international folklore festival, Trnavská brána, in mid-August. Most of the events, workshops and music performances will be held on the promenade and the city's amphitheatre. A parade alongside the promenade, during which visitors can witness people wearing traditional costumes, is one of the highlights of this festival. Although the event is free, if you want to see a special performance by Slovakia's most popular folklore ensemble, SĽUK, held on August 19 in the amphitheatre, prepare €5. The ticket can be purchased here or on site. The complete programme (in Slovak) is available here.

The 46th international agricultural and food exhibition, AGROKOMPLEX, will take place in the second half of August. On average, the exhibition attracts more than 100,000 visitors, also because of several other sub-exhibitions: a national exhibition of farm animals, fruit of the year, vegetable of the year, festival of Slovak products, 3D rural development of Slovakia and the like. As well, a number of discussions, seminars, children's competitions and other events will be held. The 2018 photo gallery is available here.

At the same time, the EKOFESTIVAL and ENVIRO exhibitions will be running at the exhibition complex. The exhibitions will present firms and organisations that work on preservation and protection of nature, and promote environmental education and sustainable development principles. Workshops, film screenings, and lectures will be prepared for visitors. The programme (in Slovak) is available here.

Place: Nitra
Venue: agrokomplex NATIONAL EXHIBITION CENTRE
Date: August 22-25
Time: 9:00-18:00
Admission: €5 and €3 (students, pensioners over 62) for all exhibitions on given dates. Tickets are available on site.

The Slovak National Uprising (SNP), one of the biggest armed actions against fascism in Europe, is one of the milestones in Slovakia's history. The First Czechoslovak Army represented the decisive force of the SNP. This documentary exhibition has several parts, mapping the SNP preparations, the creation and decline of the First Czechoslovak Army and its battles, and the importance of the Uprising.

Have a great August and celebrate the last summer month by going to one of these events!

Thank you for singing up. Shortly an email will be sent to the address you provided to verify your e-mail.
Error! Please try to register again later, your e-mail was not registered.
Your email is not in a correct format.
Please confirm you are not a robot.
Share on Facebook (189)Comments disabled