From Chopin to Pink Floyd: Music helps the universe continue

Musicologist Marcus Zagorski has experienced many different cultures in his lifetime, but his love affair for music has never changed. 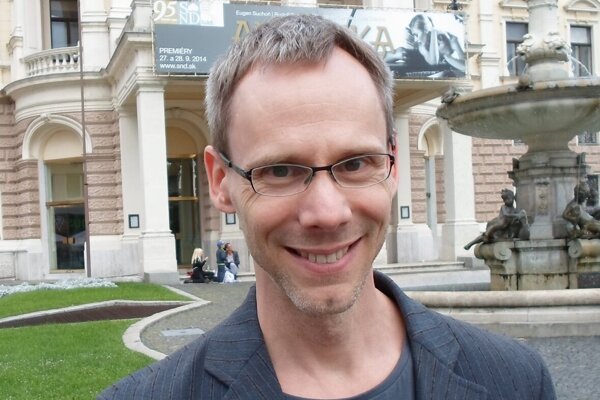 Dr. Marcus Zagorski is a musicologist, composer and professor at Comenius University in Bratislava. He studied musicology at Stanford University and composition at McGill University.

What does music mean to you?

Marcus Zagorski (MZ): Music has many different definitions. For example, Edgard Varèse, a French-American composer of the 20th century, said simply that “music is organised sound”.

How did music come into your life?

MZ: Like all kids, I listened to music and took piano and guitar lessons. From a young age I wrote little piano pieces and things like that. I started playing guitar when I was in my teens and got really serious about it. I went on to study composition and music theory. It was not possible to study guitar at my university, so I studied piano. By studying composition and music theory and playing more piano, I moved further and further away from popular music and guitar, and more into classical music.

Are there any kinds of music genres that changed your view of life?

MZ: Yes, there were particular pieces that I associate with certain times in my life. In the 1980s I played in rock bands, performing songs by Led Zeppelin, Rush, Deep Purple and Black Sabbath. I grew up in the suburbs of Detroit in the 1970s and 1980s. This city has a lot of music. I listened to hard rock and progressive rock, bands like Yes, Rush, Emerson, Lake & Palmer, Pink Floyd. I still love that kind of music and listen to it often.

People that I met in college helped me move toward music as an area to study. I remember the things they played for me and the things I learned about through them because of the tapes they had. I heard Chopin’s Nocturnes for solo piano, which opened up a new world to me. I still think this is some of the best music ever written. There was also a madrigal by the English Renaissance composer Thomas Morley called “April is in my mistress' face”. I remember being affected by that beautiful piece, along with Debussy‘s “Clair de Lune”, which everybody loves. I really thought it was incredible music.

You have lived in a lot of different countries, different places, and now you are in Slovakia. How do you feel here? Like a local or more like an immigrant?

MZ: That’s a complex question actually. I knew a little bit about Slovakia and its culture beforehand because I visited my girlfriend (now my wife) who is from Slovakia. I have also lived in northern Germany, which is central Europe as well. I came here because I knew that I would feel at home in this culture, or at least it would be familiar and comfortable to me. I liked the way how people lived their lives here. The day-to-day life I have found to be quite pleasant.

In other ways I am aware that I am from somewhere else, and that may be a legacy of Communism. It is very hard to say what it is. You just feel that you’re from a different place.

Before I lived here, in “the East”, I was never aware of discrimination of Western Europeans against Eastern Europeans. But I see it now. For example, if I go to Vienna and tell people I am from Slovakia, I get a very different reaction than if I tell them I am American. If I tell them I am from Slovakia, sometimes they seem a bit afraid. At least some people treat me differently. It is as if they don’t see me as an equal. If I tell them I’m American, they seem to say “Oh, you’re one of us! Welcome!” So, the discrimination and prejudice is still very present in Europe, between East and West. I don’t think any Western European would notice it, unless they lived in Eastern Europe. And it was the same for me: I didn’t notice it until I lived here.

After all the experience living abroad, in different places, could you consider yourself cosmopolitan?

MZ: I don’t know, because I am not sure of the meaning of that word. I lived in many different places (in five countries so far), but I still haven’t lived in Asia or Africa and probably never will. I have no experience of those cultures, which are entirely different from this culture, and there are differences within one country. Take Germany, for example. Somebody who lives in Berlin may have a very different experience of the world and the diversity of the world than somebody who lives in a small town. They’re both in Germany, but they’re exposed to different things, and I think this is true in many parts of the world.

You have received grants and awards, including Stanford's Walter J. Gores Award for Excellence in Teaching. The Gores Award is the University's highest award for excellence in teaching. Could you tell more about it?

MZ: It was a wonderful feeling when I received that award. I think I was fortunate in many ways that I had students who were receptive to the way I was teaching and who felt like they got something out of it. I was also really lucky that somebody nominated me.

I was working with a visiting professor and teaching with her as a teaching assistant. She decided to nominate me and did the work of writing the letter of nomination, talking to students and gaining their support for the nomination. So there were many things that helped.

I once read of an older professor who told a younger professor that “you are not here for the most intelligent, gifted and hard-working students. You are here for the students who don’t work as hard and aren’t as gifted, because they are the ones who really need your help”. I think that’s true because somebody who’s motivated can learn on their own. They will do what is necessary to learn what they want to learn. But I am also happy to be able to communicate with students who are really hard-working and motivated.

Are there any challenges you want to overcome or plans for your future?

MZ: There are things that I want to do, yes. I’ve been studying music now for 30 years. I reached the point where I will always do it and I will always produce my work in musicology and composition, but it’s not the centre of my life anymore.

I have other interests, things I always wanted to do but never did because I felt I didn’t know the right people or how to begin. I’ve reached the point where I can say: if I don’t do those things right now, I never will. I started climbing, for example, and I love being in the mountains. Now all I want to do is climb and go to the mountains and be there more. That’s what I am looking for.

Thank you for singing up. Shortly an email will be sent to the address you provided to verify your e-mail.
Error! Please try to register again later, your e-mail was not registered.
Your email is not in a correct format.
Please confirm you are not a robot.
Share on Facebook (206)Comments disabled