For a Decent Slovakia protest gatherings will continue

Three more gatherings have been added to the calendar. 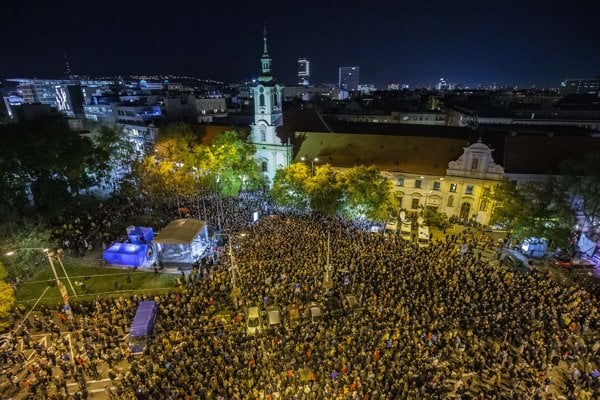 The For a Decent Slovakia protests will be held around the country on September 20, including in the biggest cities like Bratislava and Košice (Source: SME)
Font size:A-|A+  Comments disabled

The For a Decent Slovakia initiative plans to return to the streets and through the protest gatherings call on those with power to meet their demands.

The gatherings are scheduled for September 20, 2019, for the anniversary of the 1989 revolution, and February 21, 2020 to commemorate two years of the murders of investigative journalist Ján Kuciak and his fiancée Martina Kušnírová.

As the organisers mentioned, several “horrible things” have been revealed since the investigation of the double murder started. This includes the connections and influence of Marian Kočner, charged with ordering Kuciak’s murder, on politicians and state bodies representatives, the misuse of the Slovak government’s plane to kidnap a Vietnamese citizen, the low trustworthiness of ex-police corps president Tibor Gašpar, and Mária Trošková and Viliam Jasaň serving as go-betweens between the Government’s Office and the Italian mafia.