Mayors of four capitals have signed a pact to fight populism. 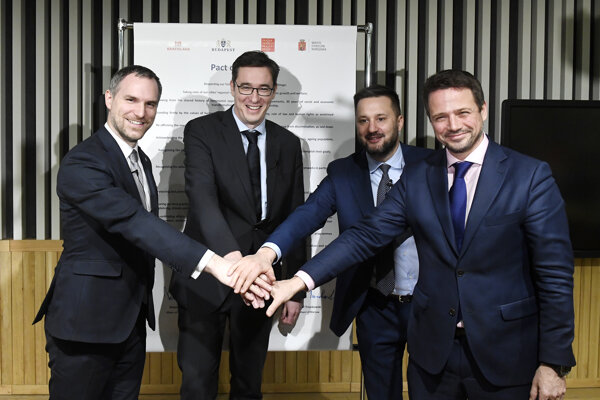 The mayors of the capitals of the Visegrad Group countries (the Czech Republic, Hungary, Poland and Slovakia), from left: Zdeněk Hřib of Prague, Gergely Karácsony of Budapest, Matúš Vallo of Bratislava, and Rafal Trzaskowski of Warsaw pose after they signed the Pact of Free Cities in Budapest, Hungary, on December 16, 2019. (Source: AP/TASR)
Font size:A-|A+

The mayors of Bratislava, Budapest, Prague and Warsaw have joined forces to defy their populism-driven governments, the Financial Times wrote on December 16.

Gergely Karácsony (Budapest), Matúš Vallo (Bratislava), Rafał Trzakowski (Warsaw) and Zdeňek Hřib (Prague) met in the Hungarian capital with the aim to sign the so-called “Pact of Free Cities”. They have pledged to join forces in an effort to protect EU values and the environment.

“Populism striving for hegemony cannot win over cities,” Karácsony said, as quoted by the Financial Times. Urban areas can be the points from where democracy can spread and choke populism to death, he added.

For Europe, against home governments

The national governments of Hungary, Poland, and the Czech Republic have opposed Brussels' policies, including the Green Deal, several times recently. Brussels is also looking into the reported breaches of the rule of law and misuse of EU funds by these countries.

“We have difficult governments, but we are very much committed to European values, to democracy, openness and freedom,” Trzakowski said, as quoted by the Financial Times.

The capitals need EU funds for their growth, he added.

Therefore, the four mayors hope the European Commission will welcome the initiative, channeling the money straight into the cities in the near future.

If they succeed, it may encourage liberal forces within central Europe to act harder against populism, said Hřib.

Some Hungarian mayors have already united to fight its national government, which restricted their powers, according to the Financial Times.