An unexpected ad saved the paper that now celebrates 25 years

Four founders of The Slovak Spectator recall the early days of the newspaper. 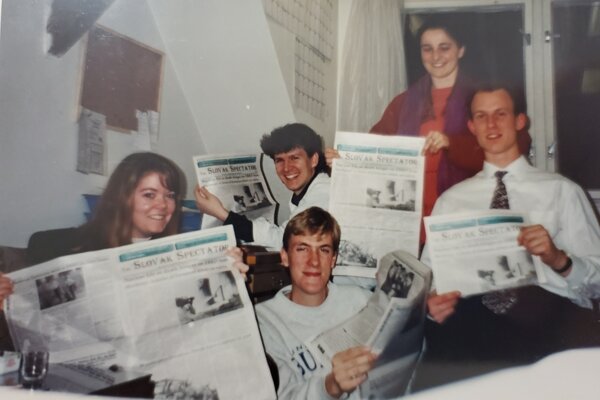 The idea for The Slovak Spectator found its roots in late October 1994.

Along with Eric Koomen, they founded The Rock (publishing house), which was officially registered as a limited liability company (spol. s r.o.) on January 3, 1995.

Lewis and Zedník were co-editors, Stoll the business manager and Koomen the financial manager.

Youth and blind courage, excitement, long working hours and many unanswered questions. With these feelings, four young Americans launched their big project: an English-language newspaper in a small central European country that had just become independent.

“We felt Slovakia didn’t have the respect it deserved, a hidden gem in central Europe, not a country of peasants portrayed by western media,” one of the founders, Daniel J. Stoll, recalls. “The beloved Spectator green of our masthead meant to evoke the colour of Slovakia’s pine forests across great valleys, mountains and rolling hills.”

Stoll, Eric Koomen, Rick Zedník and Richard Lewis founded The Rock publishing house on January 3, 1995, officially registered as a limited liability company. Two months later, the first issue of The Slovak Spectator came out as a bi-weekly with 12 pages.

Beata Balogová: Autocrats feel a chance against the media once again

Tom Nicholson: The virtue of knowing too little

The newspaper’s name is an alliteration based on the principle of self-awareness, Stoll explained. Although they were aware that as Americans they had no legitimacy to give their opinions about Slovakia, they wanted to be faithful to the principles of good journalism: sound reporting with multiple sources on the record, accuracy and independence so as not to waiver when powerful politicians or business leaders (including advertisers) wanted to ‘approve’ a story before publication.

Off to a rocky start

In the new paper, Lewis and Zedník were co-editors, Stoll the business manager and Koomen the financial manager.