Most beautiful book in Slovakia for 2019 is The Divine Comedy

The trilogy was illustrated by Miroslav Cipár. 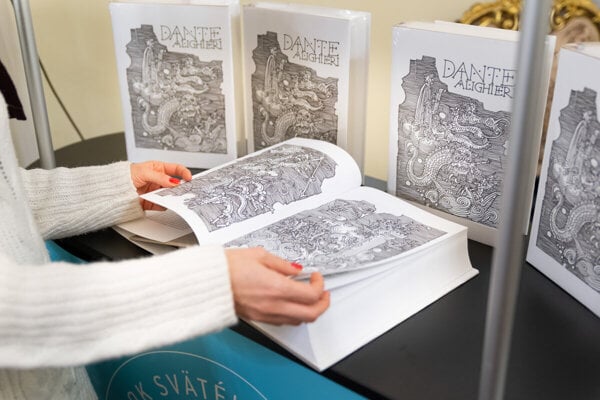 Dante Alighieri’s The Divine Comedy was chosen the most beautiful book in Slovakia for 2019 due to its overall artistic and technical quality.

“Dante’s Divine Comedy was published in Slovakia for the first time in one volume, and I’m very glad that it caught attention of both readers and experts,” said Ivan Šulík, head of the Spolok sv. Vojtecha association, as quoted by TASR.

It was the second triumph for the publisher since receiving the main prize also for 2018, with Faust by Johann Wolfgang Goethe.

Both books were illustrated by painter Miroslav Cipár. The graphic design is the work of the Pergamen studio in Trnava, while printing and technical processing was done by the Finidr printing company of the Czech Republic.

The book was translated by Jozef Felix and Viliam Turčány.

Due to the current coronavirus situation, the results of the competition organised by Bibiana (International House of Arts for Children) were announced online.

“This year’s competition was of high quality, with the highest number of books competing – 214,” said Karol Felix, chair of the jury, as quoted by TASR.

Other awards from the Culture Ministry were given to Katarína Vavrová for her illustration of Kytice (The Bouquet) by Karel Jaromír Erben, and Jakub Dušička for the graphic design of Obchodná Ulica (Market Street) by Zuzana Dušičková.

The Bibiana award given to publishing houses for the most beautiful children's book went to the Buvik publishing house for Žabiatko (Little Frog) by Ľudmila Podjavorinská.