Thank heavens for Trenčín (from our archive)

The prettiest of Slovakia’s big cities is home to the grandest castle in the country. 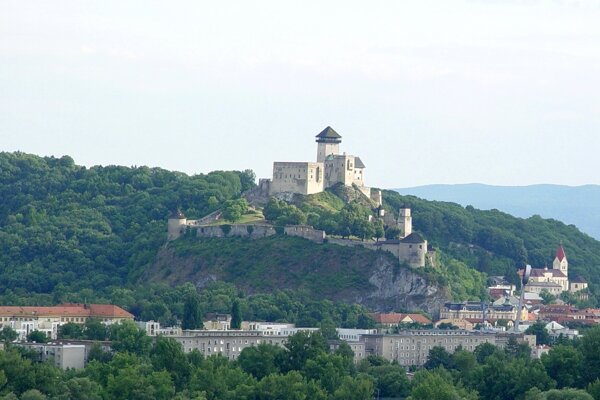 This is an article from our archive of travel guides, Spectacular Slovakia. We decided to publish this gem for our readers, making only necessary adjustments. Some of the writer’s observations from 2002 have changed, but much still holds true. For up-to-date information and feature stories, take a look at the latest edition of our Trenčín Region Guide.

Trenčín taught me a lesson on my last visit I had somehow briefly forgotten: that travelling in Slovakia is fun.

I needed this reminder because I had begun my day in Púchov, a boring little town on the river Váh that is so unremarkable that, with nothing else to look at, I found myself studying the cinema’s film posters for a good deal of my visit.

It got worse in Ilava. For those passing on the Bratislava-Košice train line, Ilava looks like an enchanting little place. A double-spire cathedral tops the town, and what appears to be a fortification wall nearby gives it further apparent character. But getting off the train, the first thing I noticed was that Ilava seemed deserted; in the early afternoon not a single person was to be found on the main square. The second thing I noticed was barbed-wire. That lovely cathedral and wall I had admired from a distance is actually part of one of Slovakia’s largest prisons.

So when I arrived in Trenčín my mood was decidedly grumpy. Thankfully, though, in Trenčín weary grouches are instantly transformed into giggling travellers invigorated by the privileged feeling of visiting a beautiful city.

First, up the castle hill. Trenčín Castle is striking, looming high above the picturesque Old Town below. A tour of the castle is always engaging. I have taken it four times now, and each time I learn something new. On my last trip, for example, the guide pointed out a large wall painting of one Jozef Ilešházi, a judge and county head/administrator in the 18th century. “His right foot is an optical illusion,” the guide said. “When you walk past, it appears to follow you.”

That was a new one. But the story almost every guide tells is that of the castle well, know as the ‘well of love’. According to legend, it was dug by Omar, a Turkish soldier. The king of the castle had taken his true love, Fatima, prisoner. Scorning proffered jewels and other such riches, the king would only release her if Omar could provide the castle an internal source of water, thus enabling the fortress to withstand even the longest of sieges.

For three years, the story goes, Omar dug through the soil and rock. He finally struck water 80 metres down and Fatima was released. Reunited at last, he threw himself at her feet and said: “My dearest dove, the brightest star of my endless nights in the rocky depths, and the risen sun of all my future days, you are mine forever and we are free.”

But quixotic folklore was not responsible for my improving spirits that day. Rather, it was the guide and my group. Tourist sites in Slovakia are different from those in other European countries both in that they are a bit rougher around the edges and in that they are far less formal . Tours here are fun and friendly, even when things go a bit awry.

Consider this visit: It begins with the guide telling our group of 25 that the lights in the castle are not working. Nobody knows why nor even when they will be fixed. The group, though, is undaunted and the guide is easily persuaded to take us in, lights be damned.

The tour turns out to be a disappointment. Without light most of the paintings are nothing more than dark shades forming vague figures in the gloom. Yet nobody complains, not even when the tour ends short of the viewing deck atop the main tower.

“Aren’t we going up the tower?” a visitor asks.
“I’m sorry, but unfortunately we can’t,” the guide says.
“Why not?”
“There is no electricity and the walkway up to the tower is very dark.”
“Oh, come now. It’s just a little ways off.”
“No, really we can’t. Just last week a guest fell and injured herself. And that was when the lights were working.”
“So, you see? The lights are useless! Who needs them?” This quip earns a round of laughter from the group and a smile from the guide. But she stands firm and says the tour is over. And still, nobody complains. The man who called the lights useless even thanks her for the tour as we leave. Watching all this, I can’t help but smile, reminding myself: “Ah, yes, that’s right. This is fun.”

Walking back down into town, I am struck yet again by how nice Slovaks can be, especially at tourist sites. Maybe it’s the same all over, but I doubt it. Had the lights not been working in, say, an American museum, you can bet that there would have been complaints filed, names taken and refunds demanded. But here it’s just a shrug of the shoulders and a ‘thanks anyway’.

While I’m thinking all this, the ticket collector at the front gates bursts from her booth in an apologetic fury. “I’m so sorry,” she says (and she really means it). “It is such a pity that you did not get to go up the tower.” After consoling her by explaining that I’ve already been up the tower three times, she strikes a dramatic pose with her hand on her cheek and, as if praying, whispers, “Oh, thank God.”

This is why Trenčín is my favourite Slovak city. Incredible castle, polite and helpful locals (sometimes alarmingly so), and a gorgeous Old Town. There is also great hiking, with trails into the forest starting directly from the town centre. In these hills, hikers are offered the unique sight of Trenčín Castle from the rear, plus a monument in the middle of the forest erected in memory of those who were killed by the Nazis in World War II. An unnerving stone carving depicts a man, hands tied behind his back, with his head being forced under water at gunpoint. 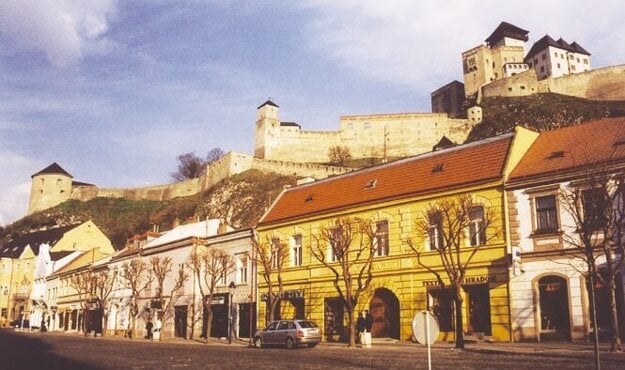 Whatever you do in Trenčín, make sure to include a few minutes of sitting on a bench on Mierové námestie at night. From here, what may be the most magical view in Slovakia is on offer: the magnificent Trenčín Castle ablaze in a flood of lights. Breathtaking. Thank heavens for Trenčín! This is a special place.