The developer of the new city district is seeking ways to incorporate the basement of the historical structure into their project. 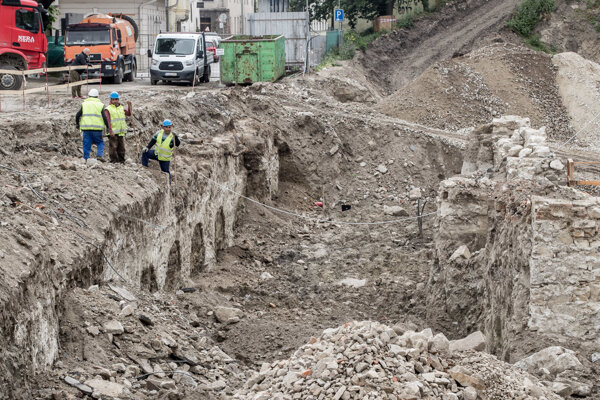 The view from the Castle Hill down on the construction site of the new Vydrica district exposes some walled arches. These comprise the basement of the historical Arsenal that archaeologists discovered during excavation work in January this year.

“We did not expect this, since the buildings that used to stand here were pulled down in the 1960s and replaced by modern constructions,” said archaeologist Drahoslav Hulínek, head of the archaeological supervisors on the construction site of the new Vydrica development. Archaeologists excavated the foundation pillars and the supporting arches of the Arsenal basement.

The Arsenal was built as a military warehouse in the middle of the 17th century, explained Ivo Štassel, art historian and director of the Municipal Institute of Monuments Protection in Bratislava (MÚOP). The army administered and retained its function until early 20th century. When in the 19th century the army started a bakery in the area, a tall chimney was added to the building. It was the largest building on the southern foot of the Castle Hill, marking the border between Vydrica and Zuckermandel, once independent settlements that later merged into the city. The Arsenal was razed in the 1960s.

“Findings like this document the development of the area in a historical context,” said Ján Mackovič, director of the Bratislava Regional Monuments Office (KPÚ BA), stressing the importance of this area for development of Bratislava. The river ford used to stand in the area, and the toll collected was a permanent source of income.