The festival’s online edition, Pohoda in the Air, streamed 31 gigs. 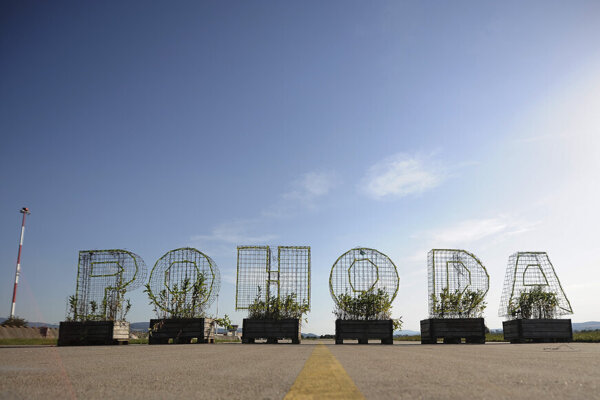 Pohoda in the Air, an online edition of Slovakia's largest music festival, Pohoda, was streamed from Trenčín airport between July 9 and 12, 2020. (Source: SITA)
Font size:A-|A+38

With stunning aerial shots of the empty but sunlit Trenčín airport and two Slovak artists, Dorota Nvotová and Milan Lasica, performing on its runway with a piano, Pohoda Festival got going.

Despite the pandemic, the organisers of Slovakia's biggest music festival decided to hold and move the event - renaming the festival to Pohoda in the Air - to the online space. Dozens of live and pre-recorded performances and discussions from Trenčín and other places around the world were streamed in the past four days.

"We decided to provide people not only a look into what artists do and how they do it, but also how the airport looks without visitors," Pohoda Festival founder Michal Kaščák said.

Via their home screens, festival viewers could thus see places that are not open to festival-goers under normal circumstances, including the airport tower, old military equipment, and a fire tank. 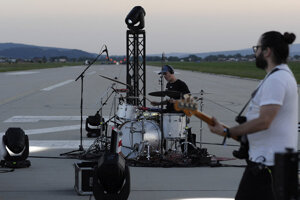 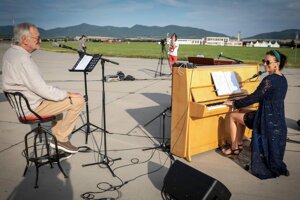 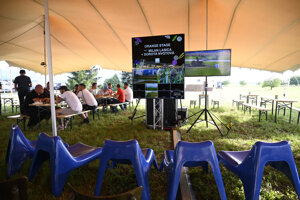 Following Lasica and Nvotová's opening performance on July 9, the Kabul female orchestra, Zohra, returned virtually to the Slovak airport, sending their greetings from Afghanistan and kicking off the festival as well.

A 'garbage' highlight from Congo

Although most performances were streamed live from Trenčín, where the festival is to physically return alongside festival-goers on July 8, 2021, some of this year's gigs were pre-recorded from other parts of the world.

Surrounded by sheep, Dutch entertainers and ska musicians, The Bazzookas, played their pre-recorded set under the open sky on the evening of July 10.

Marina Sarri & Fonés, a Greek actress and producer who is said to represent the young Greek generation through her music, performed an acoustic session on Friday as well.

Prior to the late Friday night performance of the Belgian group, Shht, the set by the Kinshasa-based band, Fulu Miziki, turned out to be a highlight of the festival.

"The collective of these multi-disciplinary artists creates instruments from waste and tirelessly discovers new sound possibilities in them," Pohoda in the Air organisers claimed.

On Saturday, the American artist by the name of The Space Lady took over the audience's screens with, undoubtedly, the strangest set. A feature on the music scene since the seventies, she has grown into the 'outsider music' cult thanks to her presence and determination to fight for justice and love via music.

The Iranian-Israeli singer and actress, Liraz, brought to people's living rooms a mixture of modern sounds and the beats of Los Angeles and Tel Aviv with ethnic flavours of her Tehran roots.

Similarly to The Space Lady, Liraz decided to fight for gender equality through her single, Zan Bezan. She performed it as part of her Pohoda set from Tel Aviv.

Australian performer Donny Benét, who played at Pohoda Festival for the first time in 2018 and returned to Trenčín last year, rejoined the 2020 line-up as well. Bringing back the vibes of the eighties, he performed new songs off his latest album, Mr. Experience, from his Australian studio.

Another act virtually returning to Pohoda was the San Francisco-based Kronos Quartet. They performed on Sunday in the early morning, when festival-goers traditionally welcome the sun over Trenčín Castle. This year, however, every viewer could observe not only the sunrise in Slovakia but also the sunset in San Francisco.

Apart from international artists, many Slovak and Czech musicians took part in Pohoda in the Air, including Stroon, Billy Barman, Luvver, and Čavalenky.