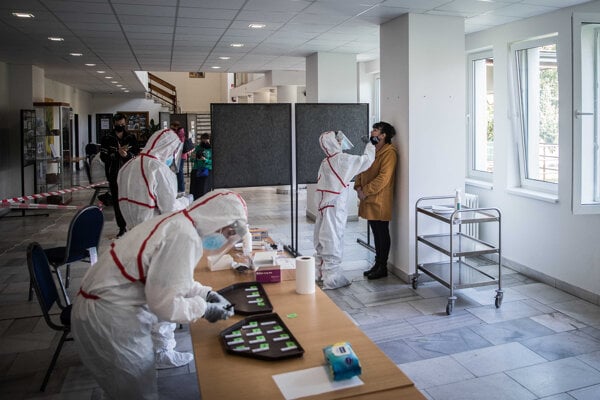 Altogether 140,945 people participated in the pilot phase of the nationwide testing

that took place in the four hardest-hit districts in Slovakia on October 23-25.

This represents about 91 percent of the expected participation. Originally, the Defence Ministry was talking about 180,000 people being tested, but it later modified the number to 155,000, excluding the patients of nursing homes not required to attend.

“I’m extremely satisfied,” PM Igor Matovič (OĽaNO) told the October 26 press conference, adding that by identifying the people with a high potential to spread the disease and putting them in isolation, they reduced the risk of other people getting infected. “The pilot has thus confirmed the aim of the nationwide testing.”

The nationwide testing, scheduled to take place during the following two weekends, still needs to be approved by the central crisis staff whose meeting started on October 26 at 14:00.

Other ministers involved in the pilot testing have been satisfied.

As many as 5,063 people have been involved in the field, ensuring the testing, according to Defence Minister Jaroslav Naď (OĽaNO), whose department was tasked with preparing the nationwide testing.

The ministers also praised the people who attended the testing, and the fact that no major incidents have occurred. They hope that the testing scheduled to take place the next two weekends across the country will be a similar success.