The election would be won by Hlas, plus Za Ľudí and ĽSNS would drop from parliament, AKO poll suggests. 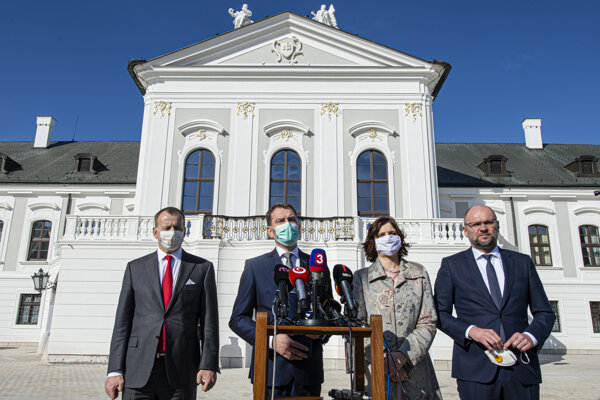 If the general election were held in the first half of March, the current ruling coalition would win only 62 seats in the parliament. At the same time, one of the parties would fail to pass the electability threshold of 5 percent.

This stems from the recent poll carried out on 1,000 respondents by the AKO agency between March 8 and 12.

Extremists and Za Ľudí out

The election would be won by the Hlas party of ex-PM Peter Pellegrini with 24.9 percent of the vote. It would be followed by Freedom and Solidarity (SaS) with 14.3 percent and the Ordinary People and Independent Personalities (OĽaNO) with 13.1 percent.

There would be four more parties sitting in the parliament: Smer with 8.7 percent, Progressive Slovakia with 8 percent, Sme Rodina with 5.9 percent, and the Christian Democratic Movement (KDH) with 5.2 percent.

Two current parties sitting in the parliament, Za Ľudí and the far-right Kotlebovci – People’s Party Our Slovakia (ĽSNS), would receive only 4.3 percent each. While the February AKO poll showed ĽSNS outside parliament (following the departure of several MPs), Za Ľudí was supported by 5.4 percent, occupying 10 seats.

The March results suggest that the current ruling coalition of OĽaNO, SaS, Sme Rodina and Za Ľudí would not have enough seats to form a government again. They would control only 62 seats in the 150-member parliament.

About 20.9 percent of respondents said they would not vote. Another 2.2 percent did not want to answer and 15.9 percent said they do not know whom they would support.