Bratislava castle: The landmark that was almost demolished

Bratislava Castle has undergone some changes but remains the capital's historical treasure. 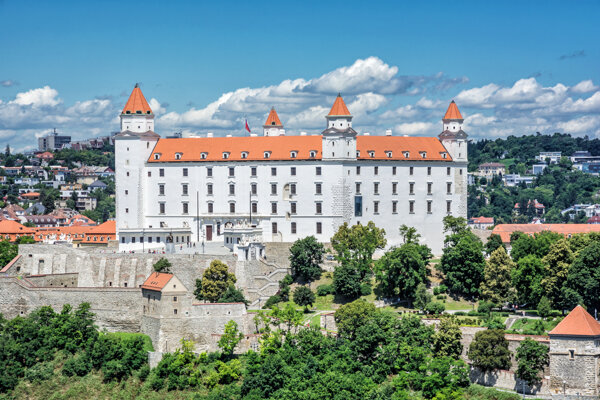 The monumental Bratislava Castle –described by some as resembling a table turned upside down – has been dominating the city’s skyline for centuries. Built at the top of an 85m-high hill, where it enjoys a key strategic location peering over the Danube, the castle has experienced heydays and periods of decline, all of which have contributed to its current appearance.

Reconstruction has been nearly continual since the castle’s first brick was laid. The most recent project sought to return the castle to the baroque style of the period of Queen Maria Theresa during the castle’s golden age. The garden, winter riding hall and orangery were added at this time.

The castle’s location has been significant since the Stone Age, with the first settlers likely to have set up home around the 3rd century BC. By the Iron Age, the site had grown important not only for its proximity to the Danube (there was a ford across the river here) but also because of its position on some significant trade routes. The Amber Road, for instance, along which Celts and Romans transported amber from the Baltics to the Mediterranean, passed the castle.

In 2009, archaeologists unearthed 22 gold and silver coins bearing the names of the Celtic nobles Biatec and Nonnos, among other extraordinary artefacts, during excavations of the castle – a haul now known as the “Golden Treasure of Bratislava Castle”. These findings, along with the discovery of the remains of Roman buildings built for Celtic nobility, which are believed to be from the 1st century BC. Remnants of the castle’s Romano-Celtic foundations were found during the controversial construction of underground garages in 2009. The findings are now displayed in an exhibit below the castle.

Bratislava Castle was mentioned for the first time in written documents in 907, bearing the name Pressalauspruch. However, the oldest part of the castle still standing is what is now known as the Crown Tower, from the 13th century. In the 15th century, the castle underwent its first extensive re-building programme and was transformed into a gothic edifice during the rule of Sigismund of Luxemburg. The king demolished almost all the existing structure and built a two-floored gothic palace with a trapezium-shaped ground-plan in its place.

The current layout of the castle, with four wings around the main courtyard, is the result of an architectural movement in the Renaissance and early baroque eras. After Bratislava became the capital and coronation city of the Hungarian Kingdom in 1526, the castle became the residence of the monarchs. It was not considered grand enough by Emperor Ferdinand I of Habsburg, who decided to rebuild and modernise the outdated medieval castle in the 16th century. He employed the best builders and artists from Italy, but almost none of their work remains today. Only the Renaissance oriel of the former palace chapel, with rich fresco decorations, survives.

The castle’s current look owes most to its 17th-century redevelopment when another floor was added to the palace, as well as two towers, bringing the total to four. However, only one of them – the Crown Tower – actually qualifies as a real tower. The others are merely turrets on the rooftop.

After Maria Theresa came to the throne in the 18th century, the castle was rebuilt again into a stately baroque residence. Her son-in-law Albert of Saxe-Teschen (who married Maria Theresa’s favourite daughter Marie Christine) added a family gallery, a predecessor of the Albertina gallery in Vienna. The large areas of the yard behind and around the castle were also cultivated into terraces, French gardens, orangeries, and summer and winter riding schools and stables. The good times came to a halt during the reign of Maria Theresa’s son, Joseph II, however, who oversaw the return to Pest for the Hungarian Kingdom in 1783, which caused a decline in prestige for Bratislava. Albert left the castle, and all the family’s precious items were moved to Vienna or further afield. Joseph II established at the castle a school and seminar for the catholic clergy, and then during the Napoleonic Wars at the beginning of the 19th century, the castle served as military barracks. This had unexpectedly dreadful consequences: the army caused a great fire in 1811 and the castle became little more than a ruined shell for more than 140 years. 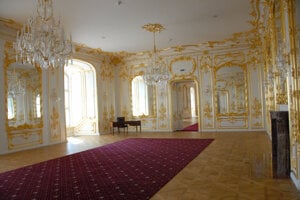 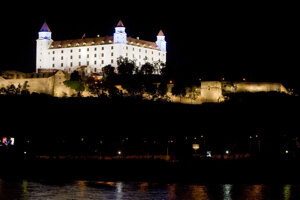 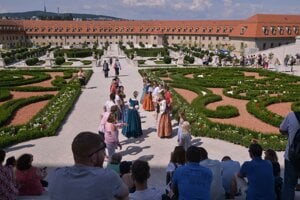 There were serious discussions in the 20th century about pulling down the ruins entirely or redeveloping the site into something completely different. However, common sense eventually prevailed and the ruins were rebuilt to the castle’s previous shape. The interior remains rather plain – few documents exist to give planners an idea of how it would have previously looked – but the castle was opened to the public for the first time in 1968. Since then, it has been home to numerous museums and the Slovak parliament has used its stately premises for ceremonial events.

The castle’s treasury currently holds its most exciting artefacts, including the coins unearthed in 2009 and a selection of Roman mosaic floors. There is also an exhibition of historical paintings, in the southern wing, overlooking the Danube that depicts former owners of the castle. Part of the castle tour is a permanent exhibition about the history of the area which is now Slovakia. On the third floor is located a café and after refreshment, the tour is completed by climbing to the top of the Crown Tower, on a clear day it offers a 360-degree view including Hungary and Austria (wind turbines visible from the tower are in Austria). The castle also hosts temporary exhibitions and a baroque garden is open for the public.

Admission to museum: €10
For more pricing options see the website of the Bratislava Castle.