Unearthing of 450 historic headstones helping to piece together history of Pressburg’s Jewish community. 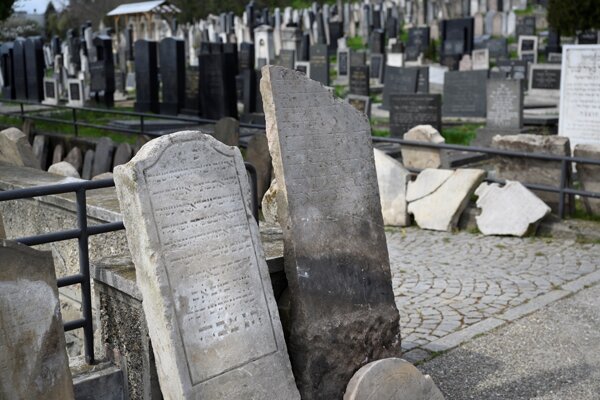 When the Jewish cemetery that had stood under Bratislava’s castle hill since the end of the 17th century was destroyed to build a tunnel during WWII, it was believed that almost everything from the site had been lost forever.

Of the entire cemetery, only the rabbinical district, which included the tomb of 19th century prominent local Rabbi and scholar Chatam Sofer was preserved.

But in early April, as Bratislava’s Jewish Community was carrying out work to clean rubbish built up along a fence dividing the capital’s Orthodox Jewish cemetery from the Christian St Nicholas Cemetery above the Danube embankment, 450 historic tombstones dating back to the 18th century and first third of the 19th century were unearthed.

Members of Bratislava’s Jewish community had been reportedly told that a few dozen headstones may have remained somewhere in the aware, but the size of the find was a shock.

“It was known that there were some tombstones there, but we thought there would be maybe 30 or 40 of them,” said Tomáš Stern, chairman of Bratislava’s Jewish Community (ŽNO Bratislava).

Among the rediscovered gravestones are those of companions of Rabbi Chatam Sofer, and aristocratic families in the city which at the time was known as Pressburg.

“The value of the tombstones that have been found is incalculable simply because we thought they no longer existed,” Stern told The Slovak Spectator.

“Also, most of them are tombstones of the most important individuals - people who ran and contributed to the development of Jewish community life not only in what was then Pressburg, but of the entire Hungarian Jewish community in that period,” said Stern.

At that time, Pressburg’s Jewish community was the most important in the region thanks to the local yeshiva, a rabbinical seminary.