He wants to officially step down on May 31. 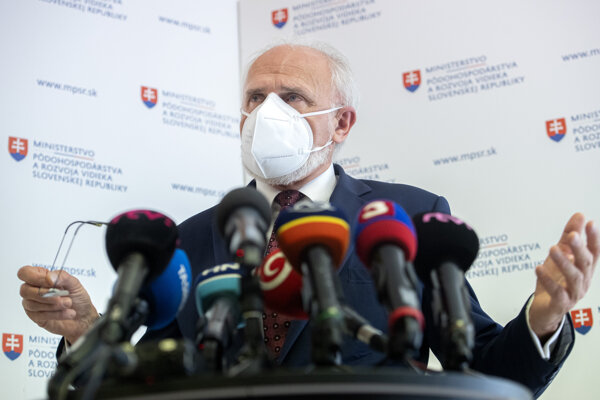 Agriculture Minister Ján Mičovský (OĽaNO) announced during a press briefing that he will resign. He wants to officially step down on May 31.

His decision is linked to the appointment of the former chair of the Slovak Land Fund Gabriela Bartošová, who is currently in custody.

He considers the appointment of the chair of the Slovak Land Fund (SPF) to be his failure, which is why he is resigning.

“I, as a forester, have never wanted to enter politics, but I believed in Igor Matovič and his anti-corruption movement,” Mičovský said at the press briefing, as quoted by the SITA newswire.

“After clarifying the situation at SPF, I could have compromised myself with my anti-corruption principle and pretended not to be affected, but I did not. I'm resigning. I still need to finish one meeting at the ministry, then I will resign.

The minister said that he has not discussed his decision to resign with anyone and the decision is immutable.

On Friday, May 21, the prosecutor of the Special Prosecutor's Office filed a motion with the Special Criminal Court in Pezinok to prosecute seven accused persons.

These people were arrested on May 19 in connection with corruption at the Slovak Land Fund within the Latifundista and Feudál police operations.

Among the accused is the general director of Slovak Land Fund Gabriela Bartošová, who was appointed to the function by Minister Mičovský.

Mičovský said that he was recommended to appoint Bartošová to the post by people from OĽaNO.

“They have presented her to me as an anti-corruption fighter who has already been there and left for the fight against corruption,” Mičovský noted, adding that he relied on the advice of his colleagues.

The ministry accepted her abdication on Monday, but the government has yet to do it as well. According to the ministry, the fact that the law enforcement bodies also deal with the nominees of the current coalition confirms the openness and sincerity of the anti-corruption efforts of this government.

The OĽaNO movement, which manages the ministry, did not say whether Mičovský will return to parliament as MP. Neither has any information about his potential replacement as minister been revealed. Mičovský said he recommended State Secretary Martin Fecko (OĽaNO).

OĽaNO thanked Mičovský for his work and added that the resignation of the minister is a demonstration of a diametrical difference between the current cabinet and previous cabinets under the management of Robert Fico and Peter Pellegrini.

According to the movement, the year of his work in the ministry was mainly marked by the fight against corruption and other "unfair practices, which for years made it difficult for honest farmers, food producers and foresters to work."

The Slovak Agriculture and Food Chamber (SPPK) respects and evaluates the minister's decision as a natural outcome of the huge number of accumulated and incorrectly solved problems that exist in the ministry.

“Ján Mičovský came to the position of minister as an anti-corruption fighter with the White Crow award,” the statement of the SPPK reads. “That is why we appreciate the minister's step and understand it on the human level.”

However, the chamber emphasised that after not getting money from the Recovery and Resilience Plan, after ongoing conflicts with Minister Budaj, after the general dissatisfaction of farmers and food producers with the ministry’s decision, his resignation is the logical outcome.

“The situation in the agri-food sector is dramatically critical. We are therefore ready to negotiate constructively with the new minister at any time," said Emil Macho, Chairman of the SPPK.