Mistaken for Native Americans. How Slovak emigrants used to arrive in the US

Leaving in a folk costume and returning in a suit, with a cigar and dollars in one's pocket must have been an enormous ad for emigration, historian says. 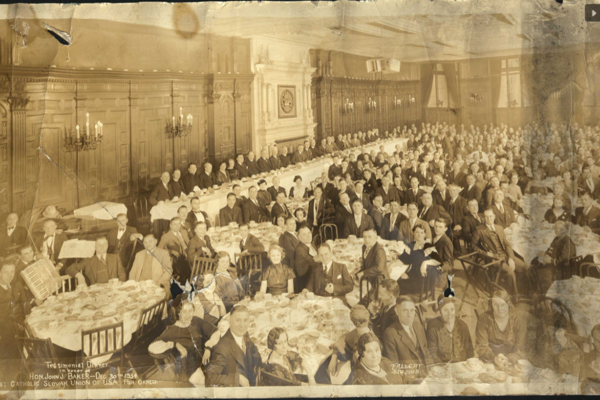 Items of everyday use, newspapers or even personal belongings of “American Slovaks” are currently being exhibited in Rákoci’s Palace in Prešov.

The exhibition organised in cooperation with historian Martin Javor and his Kasigarda, a museum of emigration from Slovakia, offers insight into the phenomenon of emigration from the territory of today’s Slovakia at the end of the 19th century and beginning of the 20th century.

Though emigration is an inseparable part of Slovak history, this topic is not reflected in our society, according to Javor.

Javor decided to name his museum Kasigarda, a Slovak garbling of Castle Garden, a word Slovak emigrants could not pronounce or understand.

Javor's family, who works as a historian at Prešov University, has an emigration history. This served as an inspiration to collect objects from the families of Slovak emigrants to the US and establish Kasigarda – the Museum of Emigration from Slovakia to the US.

Javor has managed to collect around 1,000 objects that depict everyday life, along with ceremonial moments of Slovaks who left to the US for a better life. The most precious one, he said, is the prayer book belonging to his great-grandmother.

The historian explained that his great-grandparents were offspring of the first wave of emigrants to the US. His first great-grandmother was born in Cleveland, Ohio and the second one in Homestead, Pennsylvania.

Javor’s great-grandmother, born in Homestead, moved back to Slovakia when she was two and then got married here. Javor’s grandfather was born in Slovakia, but when he was nine years old his parents returned to the US and they saw him again only when he was 36. The reason was communism, which made them wait years for a reunion.

Javor said that it is hard to comprehend what people who left overseas were experiencing back then.

“Disembarking in New York must have been an unbelievable shock, especially when nobody had left the village for 1,000 years,” he opined.

Leaving for a better life