Some people still lower their voice when speaking Hungarian in public

I wish people would perceive us as an enrichment, not as a 1,000-year-old disease that still occurs here, says a Slovak-Hungarian writer. 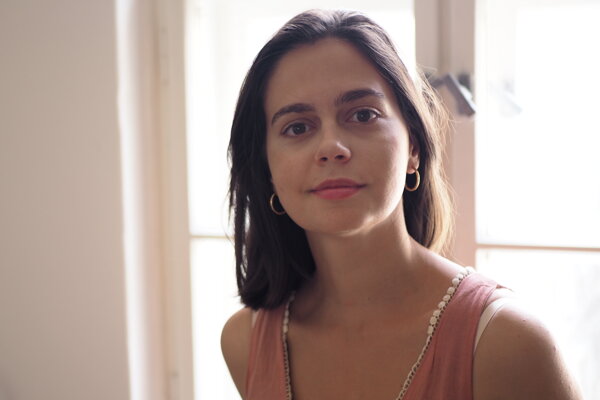 Life in the street is Hungarian. It is a natural part of the personality of the villages and towns in southern Slovakia, where Tímea Krekovič Beck, who defines herself as a southerner with body and soul, grew up.

The negative stereotype among Slovaks with little or no experience with the bilingual south has for a long time been concentrated in the saying that “down in the south” a Slovak would not be able to buy anything because the shop assistant would refuse to speak anything other than Hungarian. But Krekovič Beck says that this is no longer the case where she grew up.

“People usually speak both languages unlike my grandma’s generation, who spoke only Hungarian back then, and it certainly used to happen in smaller villages,” she told The Slovak Spectator.

The bilingual writer, journalist and editor, who also translates Hungarian fiction into Slovak, comes from a village near the border town on the Danube, Komárno, where the Hungarian minority is strongly represented among local inhabitants. Just like the other people living in the area, Krekovič Beck speaks both Slovak and Hungarian. As a journalist, she travels around the southern Slovak regions and brings their stories to her readers.

“Some people contrast with towns or localities they live in but I feel like my personality really copies the pace and the temperament of the south as I know it,” she said.

Unlike some ethnic Hungarians who do not hand the Hungarian culture and language down to the next generation, Krekovič Beck decided to share her Hungarian identity with her daughter Judit, a kindergartener in a Hungarian-language kindergarten. But what is that identity about?

Hungarian at home, Slovak at school

Krekovič Beck grew up in a village near Komárno. Her father is bilingual, but her mother only spoke Hungarian back then, so they maintained a Hungarian-language home. Her friends were Hungarian too, up until the writer-to-be was enrolled in a Slovak primary school. She spoke a little Slovak before with her father, her mom learning along. But only in school did the real language-learning begin.

“I remember that I had to ask my father what ‘pravdepodobne’ means because I did not know these basic words,” she recalls asking about the Slovak word for “probably”.

Which language people who speak both Slovak and Hungarian choose to use with others depends on the situation. For Krekovič Beck, Hungarian is reserved for childhood friends and family, while she speaks Slovak with her friends from her Slovak-language secondary school despite the fact they all speak perfect Hungarian.

“We sometimes switch to Hungarian or a funny mixture. Sometimes we do it on purpose to ensure that someone else does not understand,” she joked and admits it is a handy advantage on some occasions.

Krekovič Beck does not recall her bilingual situation as being confusing for her as a child, but some of the language allusions and nationalist notes that were present even among small children were puzzling to her.

“It made a mess in my head. I was amazed why they were telling me about such things at all,” Krekovič Beck said. It was the 1990s, what she calls the Slota era, a reference to the infamous former chairman of the Slovak National Party (SNS) Ján Slota who used to be very vocal about his outright hate towards all things Hungarian. She also remembers the neo-Nazis marching during their demos in Komárno.

“This was what I had questions about, the political and social situation, rather than about languages.”

Nationalism is a problem on both sides of the street. Krekovič Beck recalls hearing some Hungarians say that those who speak Hungarian as their mother tongue and attend Slovak secondary school were not Hungarian enough.

She is very critical of the toxic use of the Slovak-Hungarian tensions in politics even nowadays, when some politicians do it to come closer to Hungarian politics.

“I, as a member of the Hungarian minority, would immediately feel responsible for the political situation and many of my acquaintances would want to talk with me, turning me into a walking anti-argument. I do not want that anymore in our society,” she said.

Even nowadays, some Hungarians prefer to avoid speaking Hungarian in public as they are concerned about the negative attitudes of some Slovaks, especially in towns where Hungarian inhabitants are not prevailing.

Krekovič Beck has only one such experience. She addressed her daughter in Hungarian on a bus and heard men in the bus talking to each other about how they would like to hit her.

“I did not admit that I could understand Slovak. We just sat there,” she said. “Still, I did not lower my voice.”

Krekovič Beck explains that speaking Hungarian quietly in public spaces is something she noticed her mom does even now, in Bratislava or places outside Komárno.

“I have learned not to do it even though my Hungarian is not perfect, not even in terms of accent,” she explained. “This feeling that you have to be quiet is still present here.”

The feeling manifested itself in her encounter with two of her neighbours. She would always address them in Slovak when she met them in a courtyard, but at one point she noticed they understood when she spoke Hungarian to her daughter. They said nothing when other people were with them, but once when they met in the courtyard alone, they told her that she could speak Hungarian to them.

They feared the majority would react negatively, she explained, because they are Roma, and Hungarian-speaking on top of that.

“In this sense, I am quite privileged compared to other people who whisper on a tram,” she noted. The collective fear is one thing she tries to prevent from passing on to her daughter, but she realises that the Slovak-Hungarian relations have always been an explosive topic, because of nationalists on both sides and there may be some escalation in the future again.

“Good cohabitation is not about assimilation but about tolerance of different people who live with us,” Krekovič Beck said. “It takes understanding that not everyone needs the Slovak language for living and that it is just fine.”

Diversity in language and other areas of life is the biggest advantage of the region she comes from, Krekovič Beck opined. But she realises some people feel threatened when someone speaks to them in Hungarian.

“There is nothing bad about the Hungarian language. These are normal people who were born and their mom greeted them for the first time in Hungarian. That’s all,” she noted.

“I don’t want Slovaks to look at us as a threat. I would like them to accept us and our culture and our common history as enriching rather than as some thousand-year-old disease that still occurs here.”

Slovak nationalists tend to use the term “millennium-long oppression” to describe what Slovak allegedly suffered at the hands of Hungarians. In reality, Magyarisation, an attempt to forcibly assimilate various ethnic groups - including the Slovaks - living under Hungarian rule, started in the second half of the 19th century.

Krekovič Beck noted that the often-mentioned oppression is much more complicated. Poor people, equally Hungarian and Slovak, were in the same position anywhere in the monarchy.

As a writer, she sometimes ponders that bringing up her daughter as monolingual, without handing down the Hungarian identity to her, may perhaps give her peace of mind and spare her any potential lack of clarity about her identity.

“But I can stand the diverse uncertainty that might come about at school, meeting with peers who may have heard some Hungarian nationalist tendencies and anti-Slovak comments from their parents. I am ready for that. Others might not necessarily be, so I understand their decision to spare their families these troubles,” she noted.