Ex-PM Pellegrini’s party remains the most popular, but loses some support

More people would vote for both SaS and Smer, according to the latest AKO poll.

Though the Hlas party of ex-PM Peter Pellegrini maintains a significant lead from other political subjects, it lost support compared to the previous month.

As many as 19.5 percent of respondents in the recent AKO poll said they would vote for the party, down from 20.8 percent in July.

Non-parliamentary parties in, extremists out

Also, the senior ruling party Ordinary People and Independent Personalities (OĽaNO) saw its support increase. While in July, the party would have been picked by 8.8 percent of respondents, in August, it was 9.8 percent. Yet, it still lags behind its 2020 general election result of more than 25 percent. 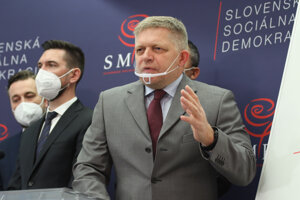 Most coalition parties are falling, unlike Smer of ex-PM Fico Read more

Two far-right parties would remain outside the parliamentary doors. Republika, formed by the renegades from Kotlebovci – People’s Party Our Slovakia (ĽSNS), would gain only 4.5 percent of the vote, and ĽSNS only 3.9 percent of the vote.