I got the best of both worlds, said Patrizio who has both Slovak and Italian parents. 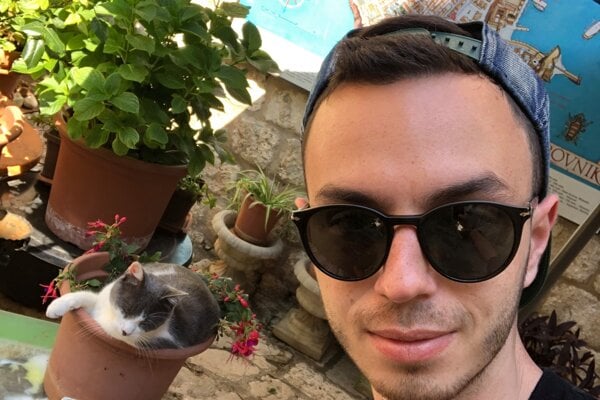 Fabrizio, Maurício, Paťo. The 20-year-old Patrizio Gravina, who grew up in Slovakia as a child from a mixed Slovak-Italian marriage, recalls that growing up his not typically Slovak name created difficulties for his Slovak classmates.

Nowadays that problem is history. “There are more people like me,” Gravina told The Slovak Spectator. By "people like me" he means children from mixed families.

In the interview with The Slovak Spectator, he says how the “Italian lifestyle” of his family often left his friends astonished and how the Italian and Slovak sides translated to his identity.

Patrizio Gravina grew up in the small western-Slovak town of Pezinok, in the winemaking area just outside Bratislava. His father came to Slovakia from Italy in the 1990s, at first for work, later meeting Patrizio’s mother, Patrícia.

Although she was the Slovak in their mixed marriage, it was his father Luigi who lobbied for the family to live in Slovakia rather than in sunny Italy – a decision that even nowadays many Slovaks consider somewhat counterintuitive.

His father did not want to leave Slovakia even after his retirement in the early 2000s. Yet Gravina maintains that his identity remained unchanged despite two decades of living outside of Italy, though he would describe his father as much quieter and calmer than he used to be, especially in public. “He is no longer the one who talks the loudest,” Gravina said.

Patrizio’s father still does not have a good relationship with the Slovak language and requires translation when he is about to deal with important issues. He has retained the habit of watching Italian news in the evening.

“Despite the fact that he lives in Slovakia, he has kept Italy with him,” Gravina noted.

A rare case at first

At primary school, Gravina sensed that his family situation was a bit different than that of his classmates, most of whom had no idea what it was like to have a foreigner for a parent, though there were always one or two people who did live in mixed families. People would often resort to using the Slovak version of his name, Patrik, and his classmates and teachers would often ask about Italian words, and about life and traditions in Italy in general.

“It was always very nice that people wanted to know, and I saw no reason not to give some more details about Italian life to whoever was interested,” Gravina said.

At the secondary school in Bratislava, which he started attending in 2016, people with parents of different nationalities were much less of a rarity.

Yet when friends came to visit him at home, Gravina recalls that they would often be shocked that he lived what he calls his “Italian lifestyle”.

“They were usually surprised about how we communicated and told me that we shout at each other and talk too much,” Gravina recalled.

Another thing was their eating habits, the “Italian way”, as he puts it. This means plenty of pasta and fish, but also dinner late in the evening, or at least much later than the usual 18:00 when most of his friends ate.

But the most surprising thing that took all Gravina’s friends aback was the bidet, which is a must-have in an Italian bathroom.

“That surprised absolutely everyone,” he admitted with a laugh. “A bidet is not a common device in Slovak households.”

Even though he grew up in Slovakia, Gravina finds it easier to build relationships with his fellow Italians rather than his fellow Slovaks. So much so that, as he admits, he would often feel unable to establish really deep friendships and relationships in Slovakia. He felt more comfortable in Italy in making new friends.

Hearing Italian in the streets of Bratislava is no longer uncommon. When he was younger, Gravina even used to address strangers in the streets if he heard them speaking Italian, trying to learn who they were and how they liked Slovakia.

“Being of Italian origin brings people together,” he said. “It is similar to having some hobby in common.”

During the coronavirus-induced lockdown, Gravina was a participan who read from Italian books to an international audience as part of the project belonging to the non-governmental Mareena organisation. He volunteers in the organisation in his free time. The NGO’s mission is to help integrate foreigners living in Slovakia. Gravina has been active in the field since 2015, when he started clothes collection for refugees as a secondary-school student.

“When I finally learnt that there was an organisation in Bratislava trying to build an international community between foreigners and locals, I was really enthused about it,” he explained.

Two languages led to another

At home, Gravina and his mother talk in Slovak, but the rest of their household conversations are in Italian. He is very thankful to be bilingual, saying that it has given him a lot, including his linguistic curiosity and affinity for languages. He studied at the bilingual secondary grammar school in French, and is preparing to study at a university in France.

“Bilingualism was never a problem for me. Quite the opposite, my two native languages helped me better understand the grammar and vocabulary of other languages,” he explained.

His bilingual and bicultural family gave Gravina his identity, which he sees as a mixture of aspects from both sides.

“From the Italian side, I'm glad that I'm so passionate about everything, and from the Slovak side, it's more about being able to stay on top of things,” he said. Moreover, Slovakia was historically influenced by many other countries, including Hungary, Czech Republic and Austria.

“The location in Central Europe offers a different perspective on all Europe,” he noted.

He is now leaving for another perspective, after admitted for studies at the university in France. Although he will study in French, he wishes to maintain his Slovak-Italian identity. “I have the best of both worlds,” Gravina said.