The water of the Danube connects me to my homeland, says Bulgarian painter living in Slovakia 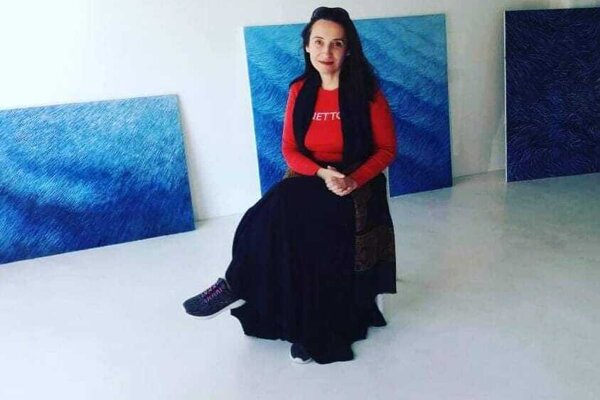 When she first arrived to Bratislava, she planned to stay one year. That was 25 years ago, but Radostina Doganova still lives in Devín just outside the Slovak capital.

Although the municipality on the banks of the Danube and the Morava Rivers has been her home for years now, the Bulgarian artist feels at home in Bulgaria, too. Over the years, her life has been rooted in Slovakia – this is where she works, and it is also where she recently opened a gallery of her own. As of July 2021, she runs the gallery with the ambition of connecting the Slovak scene with foreign artists.

“I don’t think that the mentality of Slovaks and Bulgarians differ that much, after all they are both Slavic cultures,” Doganova noted.

In an interview with The Slovak Spectator, she explained why she needs to live by the Danube River, why she counts herself lucky to come from Bulgaria, and how the coronavirus inspired her to open her own gallery.

Building a home in Slovakia

Doganova, now 46, moved to Bratislava from Bulgaria in 1996 with her mother, who came to teach at the Bulgarian Primary School and Secondary Grammar School of Hristo Botev in Bratislava.

Back then, Doganova, who had been surrounded by art since her early years as her mother was an artist, studied at the National Academy of Art in the Bulgarian capital of Sofia. After her move to Slovakia, she transferred to the Academy of the Fine Arts (VŠVÚ) in Bratislava. She thought she was going to stay for one year. In the end she never moved back to Bulgaria.

Two years later, her then-boyfriend and now-husband Dimitar joined her in Bratislava and found a job in telecommunications. The couple decided to build their home in Slovakia.

Their first names betray that they are not of Slovak origin, but Doganova said she has never encountered any discrimination. She realised how lucky she is being from Bulgaria when she talked to people of Roma minority, who explained to her that there is prejudice and stereotypes against them in the general Slovak population.

“We have never felt a big difference. The language is not so different from Bulgarian either, a person can learn it in a few years,” she said. “Maybe that’s why we felt at home here.”

Doganova noted that she and her husband both work in the international environment, her husband in a telecommunications company and she in her creative work.

“I consider it very natural to cooperate with people from other countries, to have relations with foreign artists, as we also arrived from abroad,” she noted, adding that international cooperation in art is quite natural. 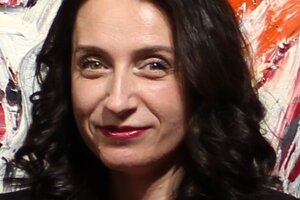 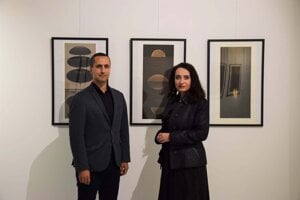 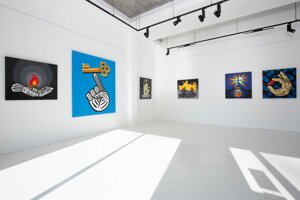 Her connection to Bulgaria is important for her. Doganova is involved in artistic activities there, including organising an artistic symposium that has been running in Bulgaria for six years now.

“I belong to Slovakia and also to Bulgaria, even though less to Bulgaria because of my physical absence there,” she said. “When you are in contact with another culture you can stay on top of things and look at the two cultures from a different point of view.”

Her mindset has materialised in the gallery she opened in early July of 2021. Located near the Petržalka train station, her Station Contemporary Art Gallery wants to focus on connecting Slovak and foreign artists.

Doganova explains that the coronavirus pandemic partly motivated her to open her own gallery. She noted that it took some professional development of hers to make such a decision, and it took the cooperation of her whole family to make the gallery a reality.

“Art is part of our family life,” she said.

Doganova has toyed with the idea of her own gallery for a while, but only with the coronavirus did both fears and motivation arrive.

“I have the experience. I believe that conditions will improve but even if they did not, it shows that I want to do it and fight for it, despite the situation or maybe because of the situation,” she said.

They received the keys to the gallery in November 2020 at the beginning of the lockdown, and only opened in July 2021. She said she saw it as unfair that galleries were forced to close during the lockdown, because not many people usually come to view art in a gallery.

The location of the gallery near the station and its name are symbolic.

“It’s a metaphor of my life, the location near the station mirrors my life and the journeys there and back,” she noted. “Maybe this station gallery will be a place where people will meet, everyone will get onboard and leave later, taking a piece of art and joy from an encounter with art with them.”

Living near the water

The gallery is a dream come true for Doganova, but it is not her only product from the lockdown period. Doganova did a lot of painting while at home. In May of this year these works were exhibited at her Felicitas exhibition at the Umelka Gallery in Bratislava.

She is already working on her next exhibition, We, People of Sea, for her own gallery. Water, sea and rivers have inspired Doganova throughout her professional life.

“Water is always in movement. Clearer water is flowing in and I see it as a metaphor for time, when I paint water that cannot be painted because it has already flowed away,” Doganova noted.

She said that she always wanted to live by the water and that is why they chose Devín, living near the Danube River.