How Slovakia failed to vaccinate its population

Resistance to novelties, jabs used for politicking, and the spread of disinformation among the main reasons for the low vaccination rate. 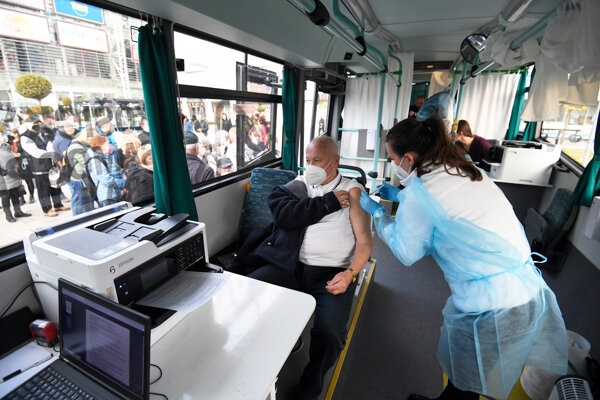 In between the pandemic waves this summer, governmental politicians reassured the people of Slovakia that they would not need to undergo another national emergency and restrictions on movement and social life anymore.

Vaccination against Covid was to be the game changer ahead of the third (Delta) wave of the coronavirus pandemic in Slovakia. Yet, fast forward a few months, and nearly one year after the vaccination roll-out started, half the population with some 5.5 million inhabitants has been vaccinated. This December Slovakia finds itself in lockdown again.

The vaccination rate of roughly 50 percent of the whole population (or 56 percent of the population over 18) as of mid-December places Slovakia among the least-vaccinated countries in the EU. Only Bulgaria and Romania are worse off. Slovakia’s neighbours and Visegrad Group partners sport higher vaccination rates – Hungary and Czechia around 60 percent of the adult population, Poland about 54 percent. The low vaccination rate has been described by experts as a weakness, particularly as the third wave looms over the country: the average daily numbers of new infections oscillated around 10,000 as the Delta wave peaked in early December, and the presence of the new Omicron variant was confirmed in Slovakia on December 11.

The low vaccination rate in the country has been a source of frustration for epidemiologists and public health officials, and a reason to worry for hospital staff once again facing overflowing Covid wards and intensive care units. In fact, as the Delta wave started accelerating, health care professionals issued a joint call on Slovakia’s people to go and get vaccinated, though with little effect.

Observers ascribe the failure to vaccinate a critical mass of people to several poor political decisions, ambiguous political communication about the vaccines, and questioning the advice of experts, which contributed to increased vaccine reluctance. With the already above-average inclination to believe in hoaxes and disinformation, these are seen as the main reasons why just about 2.7 million people were vaccinated against the virus that has killed more than 16,000 as of mid-December in Slovakia.

“We failed to persuade people that vaccination is more advantageous for them than getting infected,” said mathematician Richard Kollár, one of the leading observers of the pandemic in Slovakia and co-founder of the Science Helps initiative.

The politics of vaccination