The snows of March: Baranec

Baranec is also called the father of the Liptov region, proudly protecting all its inhabitants. 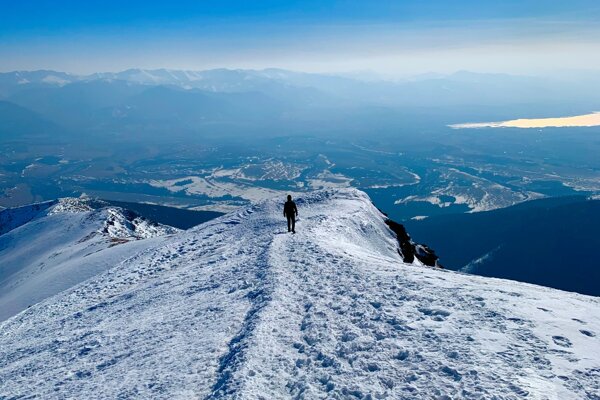 At the end of the summer, we hiked through the forest. As we reached the draft-pine part, we looked around us and sensed the white fog rolling down the green ridge, enveloping us.

We continued hiking on the ridge.

We knew where we were going, but we couldn’t see anything, just a few meters in front of us.

And no view awaited us at the top.

From there we pressed on.

On the hike down, the fog lifted briefly and sunshine illuminated the 1,000 m deep gaps to our east and west.

We came back this March.

According to the calendar, and in Bratislava, it was already spring.

It took three hours in summer, but now, in the last gasps of winter, nearly five.

And so is the hike to Baranec mountain.

Paid in sweat and blood

It is said the Western Tatras are not for everybody. Each hike here is paid in sweat and blood.

Baranec is the third highest mountain of the Western Tatras.

This mountain range, the second highest in Slovakia, covers an area of 400 km2. The largest part is in the Liptov region, the rest in the Orava region and in Poland.

They were word already mentioned as "Triti", in 1086 in the records of emperor Henry IV. And "Tatri" appeared in the Chronica Boemorum in 1119-1125.

The Western Tatras were formerly known as "Hole" or "meadowy mountains" in English. The northern part is called "Roháče". Roháče (in Slovak, "roh" means "horn") takes its name from the shape of the two peaks Ostrý Roháč (Sharp Horn) and Plačlivé (Tearful), which together form "the devil's horns".

Father of the Liptov region

Known once as The Great Mountain, Baranec was considered the highest mountain of the Western Tatras.

It is majestic and monumental. Its massif is situated aside the main ridge.

Baranec mountain is also called the father of the Liptov region, proudly protecting all its inhabitants. 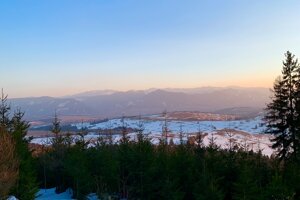 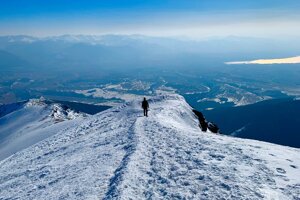 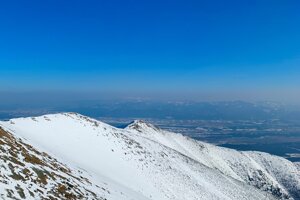 Its name is connected with Romanian herder boys, who settled down in this territory in the 15th and 16th century. Their herds gave their names to Baranec ("ram mountain") and Volovec ("ox mountain").

You can hike there from several directions.

Each is demanding, required a clime of more than 1,000 m. But it is wonderful training for vertical trail runners!

Our hike started in the Žiarska dolina valley.

It was a sunny crisp March day.

We put on our heavy winter hiking boots with crampons and started.

We took the yellow marked hiking path, which led us up through the forest, and draft-pines until we reached Holý vrch mountain, our first stop.

A never-ending ridge path zigzagged in front of us. We continued in the deep snow. One step forwards, one step deep, one step back. Again and again. The summit tower teased us briefly showing itself in the distance ahead and above us and just as quickly disappearing from sight. Until we finally reached the summit of 2,184 m high Baranec.

A very strong wind and wonderful panoramic views at the top stole our words and very breath. We admired the views of the mountains of the Western Tatras such as Baníkov, Tri kopy, Plačlivé, Ostrý Roháč, Smrek, and the Otrhance ridge, and the High Tatras.

On the hike back, a chamois jumped down the hill in front of us, leaving small footprints in the snow. The wind was getting milder, the sun was setting slowly and its rays illuminated the snow and cascaded on the surface of the Liptovská Mara water reservoir.

It was shortly after the sunset when we ended our hike in the Žiarska dolina parking place. The air was full of the exciting atmosphere before the second day of Bokami Western Tatras, the most demanding ski mountaineering race in central Europe.

Hard to be conquered

You can hike or run to Baranec. Or even you do can ski mountaineering here.

Our first hike was in summer, but the weather tested our patience.

You hike the mountains mainly because of wonderful views! And we saw only a white fog.

The second time was in the snow. It was an amazing sunny day, but again, the weather stood against us.

They decide who they allow up.

A hike to Baranec is not the most demanding in the Western Tatras.

It is a training for the more difficult hikes to Baníkov, Tri Kopy, or Ostrý Roháč mountains.

But already here you can learn to slow down before you are able to be faster.

And also you can learn to calm down and know yourself so you are prepared to conquer difficult situations.

Maybe you will find it out while hiking slowly in the snow to Baranec.