The end of the free press is the beginning of wars

On World Press Freedom Day we feel the need to make it clear that independent journalists are one of the last barriers protecting democratic societies from falling victim to autocracy. 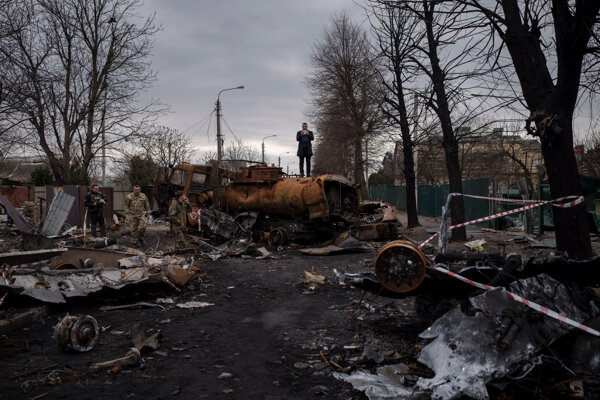 A journalist stands atop a destroyed vehicle after fights between Russian and Ukrainian forces in Bucha, on the outskirts of Kyiv, Ukraine, Wednesday, April 6, 2022. (Source: AP/SITA)
Font size:A-|A+  Comments disabled

Russian President Vladimír Putin has shown us how far the dissolution of democratic institutions and the suffocation of the free press can go. Autocrats without public control exercised through independent media are more likely to resort to aggression against groups of citizens and even other nations.

In Russia, over the past thirty years almost 60 journalists have been killed. They were shot in the head, hit by machine gun bullets, poisoned, beaten to death, hit by cars, thrown out of a window or killed as a hostage. In most cases, the identities of the masterminds behind these crimes have never come to light and the world remembers only a very few names of the murdered journalists who searched for the truth and confronted the massive state propaganda machine.

The killing of journalists is a serious indicator that something has gone terribly wrong in a country and that the world should be concerned.

Putin, however, went even further. He is now forcing Europe to live the unimaginable.

Journalists in central and eastern Europe are covering a war that is spilling over to the whole region. We tell stories of losses that will affect generations and of pain that cannot be healed by time. We explain and provide context to disturbing images, political statements and numbers. We separate facts from propaganda 24 hours a day.

We have been forced to assume new journalistic roles. We debunk misinformation disseminated by troll factories and we monitor the state to see whether war-time measures to curb Russian propaganda are in line with the law. We work to give a voice to the hundreds of thousands of Ukrainian refugees in search of humanity and solidarity in neighbouring countries so that they can build a dignified life outside of their country.

We also support our colleagues in Ukraine, who are on the most difficult assignment ever, often risking their lives to be able to bring the news to their readers. Nine journalists have already been killed while on assignment in Ukraine.

And we show solidarity with the remaining independent journalists in Russia, who upheld journalistic values in an increasingly hostile environment, but many of whom have either been arrested, exiled, or had their media outlet shut down. Yet in our own region there are other countries under Russia's spell, where propaganda is elevated to the level of state doctrine. Not even EU membership could steer Hungary away from that path. The recent election victory of Viktor Orbán and his party Fidesz puts a further strain on the distorted Hungarian media environment, where the few independent media outlets struggle to survive and to preserve the definitions of journalism as understood in democratic societies.

With Orbán spreading his illiberal influence across the region, we understand that the fate of independent journalism in Hungary is our shared European fate.

This is particularly evident in Poland, where since 2015, when the Law and Justice (PiS) party came to power, independent media have fallen victim to massive legal, economic and political pressure in the form of lawsuits, many of them SLAPPs, brought against media by political figures; ads and public announcements being withdrawn from free media; attacks on independent media by state propaganda; and a purge of independent reporters and editors in regional and local media acquired by a state-controlled company.

In Bulgaria, the Czech Republic and now Slovenia, authoritarian or illiberal-minded governments have been replaced. But the new Czech government has been slow to enact promised media reforms while in Bulgaria, though the new ruling coalition is not applying pressure on the media, the captured part of the media became a tool of Russian propaganda and is being used to fracture public opinion about the war in Ukraine.

In Romania, journalists regularly face harassment for doing their job: investigative journalist Emilia Șercan was recently the victim of a kompromat operation, which started from a document leaked from the police, and last year, the investigative team of the Libertatea newspaper had to fight more than 30 court cases filed by a Bucharest mayor.

But we journalists are not powerless. Despite verbal attacks, smear campaigns, political and economic pressures, we continue to serve our readers across the region. We understand that every silenced journalist, every political attack, whichever country it happens in, concerns the whole journalistic community.

Journalism teaches us to step back and let the sources, facts, arguments and stories speak through our work. But World Press Freedom Day is an occasion on which we feel the need to make it clear that independent journalists are one of the last barriers protecting democratic societies from falling victim to autocracy. Autocrats without public control might eventually resort to war.

This op/ed is being jointly published by a network of independent media outlets in Bulgaria, the Czech Republic, Hungary, Poland, Romania, and Slovakia to mark World Press Freedom Day.