OĽaNO sheds MPs after a failed vote on Fico 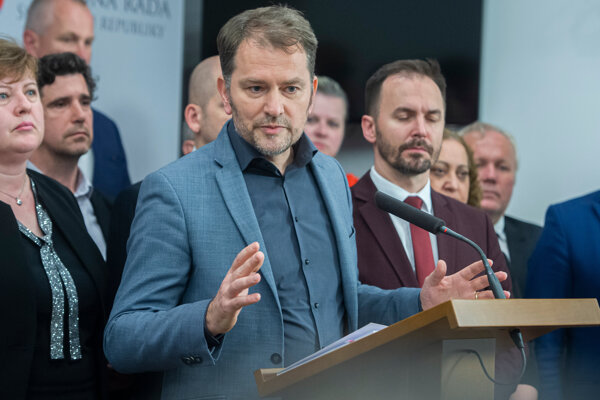 The ruling party Ordinary People and Independent Personalities have kicked out two MPs after the May 4 vote, which saw the house reject the prosecutor’s request for the arrest of former prime minister Robert Fico and pre-trial custody proceedings.

The vote on Fico

All 150 MPs were present in the house for the vote, a rare occurrence. To approve the prosecutor’s request, 76 votes were needed. In the end, 74 voted to give the green light to the prosecutor to request pre-trial custody for Fico. Two OĽaNO MPs and the entire Sme Rodina caucus abstained from the vote.

Smer chair Robert Fico faced a pre-trial custody request after he was charged, along with his former right-hand man who served as interior minister under Smer governments, Robert Kaliňák, with establishing a criminal group, and endangering trade secrecy, bank secrecy, secrecy of correspondence, telecommunications secrecy and tax secrecy.

Kaliňák is currently in pre-trial custody, but Fico is an MP and could not be arrested unless his fellow MPs voted to allow it.

Straight after the vote, Fico shook hands with right-wing extremist Marian Kotleba (ĽSNS) and his former right hand politician Peter Pellegrini (Hlas) in a victory gesture. It is believed that Fico’s triumph will be the final blow for ex-PM, current Finance minister and OĽaNO chair Igor Matovič, his political rival.