One of the longest tunnels successfully drilled in northern Slovakia 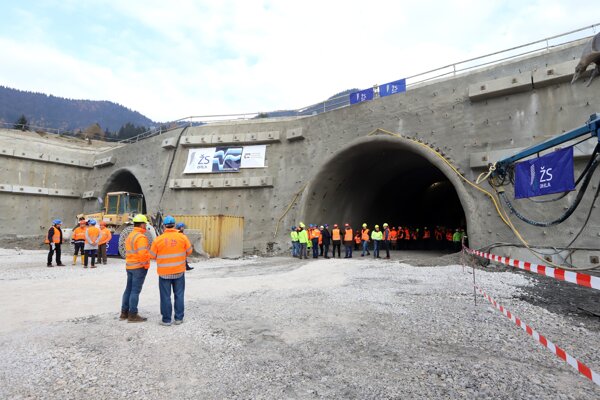 The drilling of the Čebrať tunnel in the Liptov region was completed on November 15, 2022. (Source: TASR - Ján Krošlák)
Font size:A-|A+  Comments disabled

The drilling of the Čebrať tunnel has come to an end after eight years.

The construction is part of the 15-kilometre D1 motorway stretch between Hubová and Ivachnová, near Ružomberok in northern Slovakia. The tunnel itself is 3.6-kilometres.

This will become the third longest tunnel in the country once it is constructed, the SITA news agency noted. The unfinished Višňové tunnel (7.5 km) in northern Slovakia and the Branisko tunnel (4.9 km) in eastern Slovakia are the two longest road tunnels in Slovakia.

The Višňové tunnel is projected to be completed in autumn 2024, or in 2025, Aktuality.sk recently reported. As for the Čebrať tunnel, it will not be completed by 2023 as initially planned. 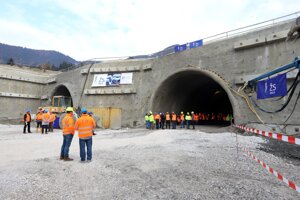 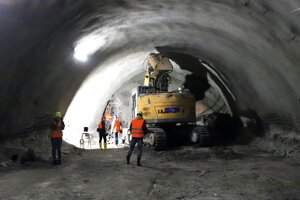 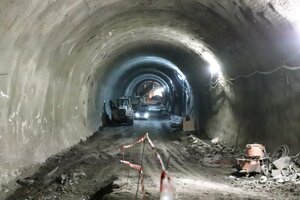 All three tunnels are part of the D1 motorway, which connects Bratislava and Košice through the northern territories of the country.

The drilling in the case of the Čebrať tunnel started in 2014. The work on the tunnel was halted after a few hundred metres due to the unstable subsoil.

The risk of landslides led to redesigning the tunnel and extending it from the initial two kilometres. The drilling work renewed in 2017.

"The contractor [OHL ŽS and Váhostav] has assured me that they do not expect further complications in the construction aspect," Transport Minister Andrej Doležal (Sme Rodina nom.) said at a press conference marking the completion of the drilling.

There are 350 construction workers working on the site.

Motorists should pass through the tunnel, named after Čebrať Peak (1,054 m), for the first time in less than two years, in December 2023. The Ružomberok motorway bypass will save motorists over 16 minutes.

The construction of the tunnel should cost €307 million excluding VAT, a sum that increased by €80 million in almost 10 years.

According to Doležal, additional financing of the motorway section near Ružomberok will clearly come at the expense of other road constructions, since the construction of the stretch is mostly funded from the state budget.