Facelift around waterfall in central Slovakia

Further development of the area is planned. 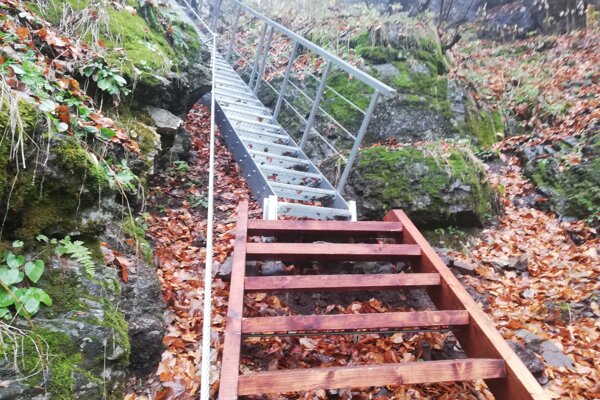 Waterfall Bytrô or Bystré in central Slovakia near Banská Bystrica is a favourite spot for many local hikers but also those who travel to see its beauty.

The national natural monument Bystrô Waterfall belongs among the largest waterfalls in the Western Carpathian volcanics; the rock wall exceeds 23 meters in height.

The waterfall is located on the southern slopes of Poľana, on the upper reaches of the Bystré stream. You can start out from Detva and Hriňová pod Poľanou, and the road to it by car and bus leads through Hriňovské lazy. An educational hiking trail leads to it through the valley of the Bystrý potok stream from the bus stop Bystré - Vrátka. The educational trail is approximately 2.5 kilometres long and tourists can reach the waterfall in less than an hour.

The surroundings of the waterfall have recently got a facelift, but Banská Bystrica Region plans further development, according to the region’s spokesperson Lenka Štepáneková.

The work carried out here mainly included the construction of durable, safe risers and railings to the waterfall. Currently, they are also planning to install new information boards with operating procedures and rules for visitors. According to the spokesperson, it will also include a dry toilet at the interception point at the beginning of the hiking trail to the Bystrô waterfall in the Vrátka section.

"In addition to the activities of the project, we are thinking about building a simple shelter from the remaining lumber," she added, as quoted by the TASR newswire.

As she mentioned, currently hikers already use exiting steel stairs and railings with steel handrails filled with steel cable. The railings are also directly at the viewpoint above the waterfall. They have also built a via ferrata training chain for children. "They also installed a wooden statue of the bear Miško in the rock niche. New resting places were created under the waterfall," she summed up for TASR.