Eurobarometer: Slovaks worry about the war more than about climate change

But the most pressing concern is the same for all EU inhabitants. 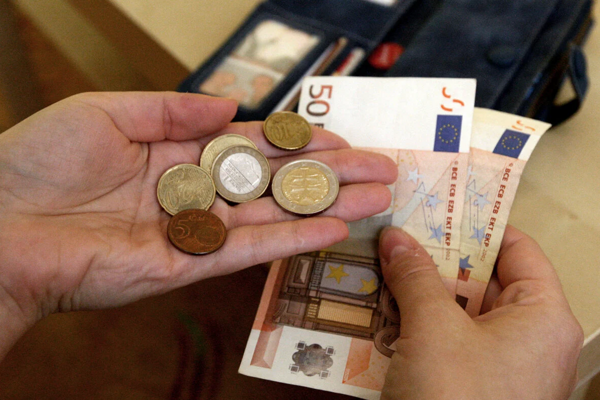 Rising living costs are the most pressing concern for most Slovaks.

In that, they are no different than people elsewhere in Europe, the European Parliament’s autumn 2022 survey Eurobarometer shows.

The overall support for the union is relatively stable amongst Europeans, Slovaks included. The survey also shows that Slovaks fear climate change less than the average EU inhabitant, the war in Ukraine a greater concern in Slovakia compared to the EU average.

Costs of living most worrying

Out of all respondents, almost all Slovaks seem to be anxious on the rising cost of living; 95 percent stated their concerns, the poll shows. While the EU average is 70 percent, Greeks top the ranking with a 100 percent of respondents saying that they are worried about the rising costs of living, the TASR newswire reported.

The cost of living, including increasing grocery prices and energy bills, affected people across social-demographic groups regardless of their age, gender, education or societal status. According to the survey, this seems to be the most pressing issue which applies for Slovakia, too. During the peak of increasing prices, the inflation rate topped the record set in 2000. Housing and groceries have became the most expensive items to maintain financially.

War among the main concerns

While the average EU citizen thinks of increasing poverty and social exclusion as a greater threat to their society, Slovaks consider the war in Ukraine crossing the country’s borders a more urgent issue. Compared to the other countries with 81 percent fearing the expansion of the war, the percentage is higher among Slovaks - a total of 85 percent. Increasing poverty follows closely with 84 percent (compared to the 82 percent EU average). 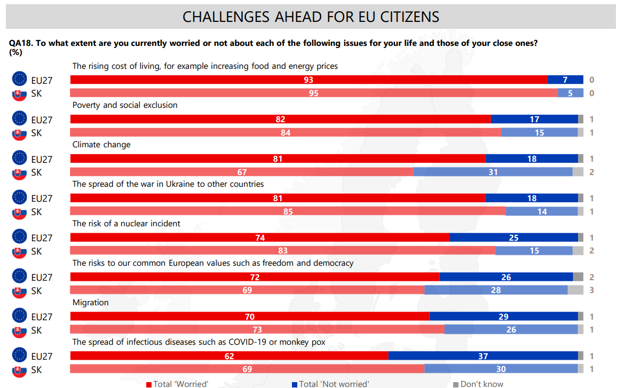 The overall consequences of the crisis are felt by 41 percent of Slovaks. The poll shows that Slovaks connect the decreasing level of their living standard with the Covid-19 pandemic, the war in Ukraine or increasing prices.

On the other hand, climate change is less of a worry for Slovaks than for the average EU citizen. While the EU average is 81 percent, only 67 percent of Slovaks stated climate change as a major concern.