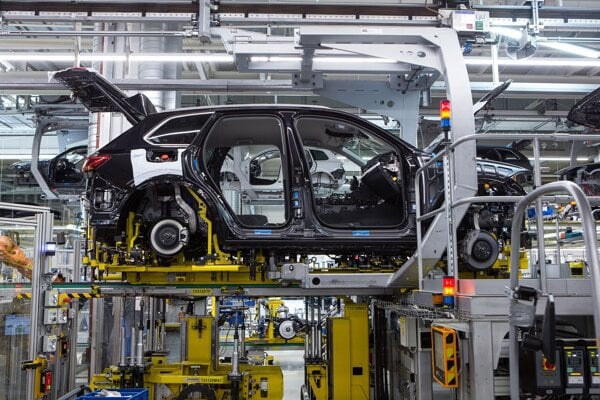 Carmakers in Slovakia have to halt car production due to a lack of microchips, too. (Source: Courtesy of Volkswagen)
Font size:A-|A+  Comments disabled

Slovakia has retained its spot as the world's leading car producer with approximately one million cars produced last year - down just under 5 on 2021 - according to data released on Tuesday.

The Automotive Industry Association (ZAP) said that last year, 184 vehicles were produced per 1,000 inhabitants in Slovakia.

“Considering the unprecedented times we’ve gone through, these results can be considered to be extremely satisfactory,” said ZAP head Alexander Matušek, citing the Covid pandemic, shortage of chips and the war in Ukraine among the industry's major challenges over the last 12 months.

“Despite difficult hurdles, the Slovak automotive industry has remained stable,” he added.

Data showed that last year car production made up 50.3 percent of Slovakia’s total industrial production while the automotive industry accounted for more than 42 percent of the country’s total exports. The number of employees in the industry grew by more than 10,000, while direct employment in the sector reached 176,000 people, and aggregate employment stood at 261,000.

Out of the four carmakers in the country, Kia Slovakia produced 311,000 cars in 2022, up 1.1 percent y-o-y, while 312,509 rolled off production lines at Trnava-based Stellantis. This was a moderate decrease from the more than 316,000 cars manufactured in 2021, company spokesperson Michal Nič told the SITA newswire.

Volkswagen Slovakia has said it will publish the number of cars produced in Slovakia only after the Volkswagen group releases its results later this year. Jaguar Land Rover does not provide individual country data, instead publishing details for its entire group.

Experts have said that among the Slovak auto production industry's major challenges in 2023 will be continuing green transformation, while also dealing with risks for the wider European economy, including uncertainty energy price and availability uncertainty, and long-term shortages of some components.

They say that against this backdrop, what state support is offered will be crucial to the industry.

With this in mind, Matušek has been critical of the current government for compensating only households for high energy prices when neighbouring countries are looking at ways to help industry and save jobs. He said this could leave Slovakia uncompetitive.

Still no battery factory in sight

He added that the government should look to secure investment in a gigafactory for electric car batteries.

“I think that we need a battery factory, given how many cars are produced in our country,” said Matušek pointing out that Slovakia accounts for around 10 percent of total car production in Europe. “It makes no sense to drag batteries across half of Europe.”

Slovakia is one of a number of countries which the Volkswagen group is eyeing up as a location for a battery factory.

In 2021, Volkswagen announced plans to build six gigafactories across Europe to meet growing demand for battery cells within its group, with Hungary, Poland, Slovakia and the Czech Republic in the running. Volkswagen was to decide on the location of the €4 billion investment in late 2022, but a final decision has yet to be made.

Matušek also criticized an almost complete lack of state support to encourage sales of zero and low-emission cars in Slovakia, pointing out the only incentives provided to buyers are lower registration fees for electric and hybrid engine cars.

There are currently 9,500 zero and low-emission cars registered in Slovakia.

Sales of new petrol and diesel cars are due to be banned by 2035 across the EU, and Matušek fears that the vast majority of Slovaks will still then be driving such cars, adding Slovakia could end up in a similar situation to Cuba, where following a ban on the import of American cars and mechanical parts the country's car stock is many decades old.

“We will be a kind of European Cuba,” said Matušek.