A choir director of musical and technical brilliance

SINCE HER DAYS as a young graduate of the Janáček Academy of Performing Arts in Brno, Blanka Juhaňáková has impressed fellow musicians and audiences with her communicativeness and musicianship. 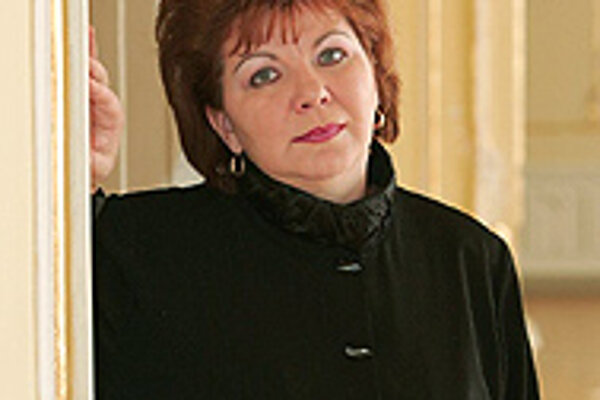 Font size:A-|A+  Comments disabled
SINCE HER DAYS as a young graduate of the Janáček Academy of Performing Arts in Brno, Blanka Juhaňáková has impressed fellow musicians and audiences with her communicativeness and musicianship.

And now this sought-after choir director and pianist is fresh off major successes at the Slovak National Theatre Opera (SND) in Bratislava.

In March 2006, Mrs. Juhaňáková guided the SND Opera chorus to a fuller tone and crisper precision in the theatre's critically acclaimed production of Puccini's Turandot.

And just a few weeks ago, she led the same chorus to excellence in the SND's compelling premiere of Cavalleria Rusticana/Pagliacci, which featured one of her admirers, conductor Ondrej Lenárd, in charge of the orchestra.

But to look only at Mrs. Juhaňáková's musical accomplishments would be to ignore half of her talents. She is also brilliant from the educational and technical perspective, having been named chairwoman of the Commission for Choirsinging in Slovakia and a member of the Artistic and Scientific Council of the Academy of Performing Arts in Bratislava.

As a choir director, she has led the Cantus mixed choir since 1989. In 1994, she established the male vocal ensemble Octet Singers.

The monumental, 14-movement oratorio for chorus, orchestra and seven featured instruments demands an experienced choir director with an aptitude for cutting through the eclectic mix of birdsong and Asian motifs Messiaen used to symbolize Catholicism's mysticism.

The piece was performed with the Köln Radio Orchestra and German conductor Eberhard Kloke.

At that time, Mrs. Juhaňáková was the director of the Slovak Philharmonic Choir, an institution with which her name has perhaps become synonymous. Generally considered to be the best choir in the country, Mrs. Juhaňáková led it from 1991 to 2001.

During her tenure, the choir expanded its repertoire with challenging productions of Schoenberg's Jakobsleiter - an atonal oratorio for soloists, chorus and orchestra - and concert performances of Kováč Wieland by Slovak composer J.L. Bella, Aida by Verdi and Turandot.

As a pianist, some of her career highlights include taking part in courses held by the late, great mezzo-soprano and educator Elena Nikolaidi. And in April 2005, she made her successful debut in Verdi's Requiem, with the Prague Philharmonic Choir and the Czech Radio Symphony Orchestra, under the baton of Ondrej Lenárd.

But perhaps her greatest role will always be as director of the Slovak Philharmonic Choir, a position she returned to in January 2005.

And the results were immediately felt.

In February 2006, the Philharmonic Choir performed Music of the Jewish Heart, a concert of music by contemporary American composer Meira Warshauer.

"The [Slovak Philharmonic] Chorus was wonderful, and the director, Blanka Juhaňáková, loved the music, and really brought out the spiritual sensitivity and power of the text. Everyone was glowing at the end."

Blanka Juhaňáková can been seen leading the Slovak Philharmonic Choir on April 16, 2007. The SND's next performance of Cavalleria Rusticana/ Pagliacci is on November 24, 2006. For more information, visit www.filharmonia.sk or www.snd.sk.