At war over the Slovak state

A RECENT opinion poll by the MVK agency found that 48 percent of Slovaks do not respect Jozef Tiso, the president of Slovakia's Second World War fascist state, while only 16 percent continue to express support for him - mainly Catholics over 60 years of age with an elementary-school education. 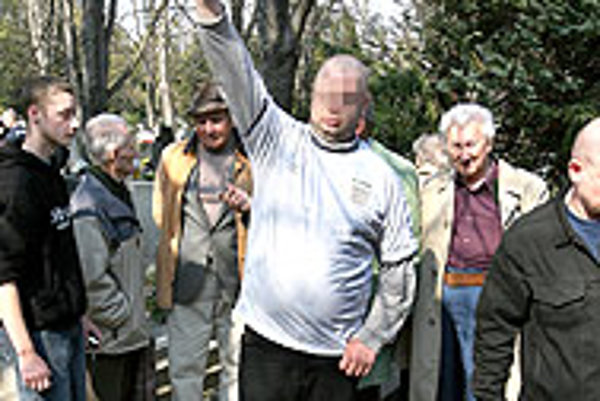 Font size:A-|A+0
A RECENT opinion poll by the MVK agency found that 48 percent of Slovaks do not respect Jozef Tiso, the president of Slovakia's Second World War fascist state, while only 16 percent continue to express support for him - mainly Catholics over 60 years of age with an elementary-school education.

These figures seem to indicate that Slovaks have not excused Tiso, a priest, for the crimes committed by his regime, including the deportation of 70,000 Slovak Jews to their deaths in Nazi concentration camps.

However, as the country commemorated the founding of the wartime state on March 14, it was against the background of praise for Tiso by a senior church official and a ruling coalition MP.

On December 27, Archbishop Ján Sokol glorified Tiso, the president of Slovak state between the two world wars, in an interview with the private news TV channel TA3.

"I respect President Tiso, I respect him very much, as I remember when I was a child, we were very poor, but at his times, we had a high standard. I even have evidence... There was prosperity here," Sokol said in the interview.

According to historians, the Slovak wartime state was tied to Hitler's Nazi Germany by an umbilical cord. In 1941, Tiso himself stressed this fact when he said, "Adolf Hitler is a real father for us. On his birthday, Slovaks like brave children give him their love, like a wreathed bunch of flowers."

On January 5, Prime Minister Robert Fico issued a statement in reaction to Sokol's comments, in which he stressed that the wartime Slovak state was fascist. Fico called Tiso "responsible for the deportations of innocent people of Jewish and Romany origin, including women, children and the old to extermination concentration camps."

But that statement was the end of Fico's involvement in the issue. Weeks later, an MP from the coalition Slovak National Party, Jozef Rydlo, continued in the tone of eulogies celebrating the head of the wartime state. On February 9 he told the Sme daily, "Jozef Tiso is the greatest personality of Slovak history of the 20th century."

Neither Robert Fico nor anyone from the ruling coalition responded.

According to historian Ivan Kamenec, when officials glorify the wartime totalitarian state, a satellite of Germany which had fascist elements, they harm Slovakia, "whether they are aware of it or not."

"Because with all the imperfection of the development of post-war Europe, the importance of the defeat of fascism and its allies has so far never been questioned," Kamenec said. "The end of World War Two and the victory over Nazism are celebrated practically by all heads of states. They are commemorated even by the heads of the defeated states."

Kamenec could not say exactly why the desire to celebrate the fascist state and its representatives still exists in Slovakia. He said he could understand defending the idea of own statehood, but he could not see any reason for defending the regime of the wartime state and celebrating of those who bear the responsibility for it.

"Maybe it is the complex of a small, oppressed nation, the inferiority complex - though we have no reason for that," Kamenec said. "Especially because in August 1944, Slovakia experienced the uprising, which fought against the totalitarian regime. If we understand the uprising as a fight against Nazism, then the complex would not be reasonable. On the contrary. The trouble is that some Slovaks have these values turned upside down. They consider the uprising to be a national treason, days of treason and disaster, and the totalitarian state and its leaders are praised as the highlight of development of Slovak history."

So, what was the Slovak state like? According to Kamenec, it was positively a satellite of Hitler's Germany. Originally it was recognized diplomatically - except by the USA - but later it was ignored completely.

"The first bridge that this state burned was joining the German campaign against Poland," Kamenec said. "That was the point when France and England broke diplomatic ties with it."

In November 1941, Slovakia formally declared war on Great Britain and the USA.

"Neither the USA nor Great Britain even acknowledged that because by that time, they did not acknowledge Slovakia as a state," Kamenec said.

The idea of creating a seemingly independent Slovak state found a positive response in a big part of the Slovak population, especially at first, because most Slovaks did not know the circumstances under which this state originated.

"The negotiations of Tiso and Hitler were not known," Kamenec stressed.

The deportations of Jews were not the only indication that Tiso's Slovak state was a fascist one, he added.

"Another factor is that the then-regime was absolutely not tolerant towards its opponents. Not enemies. Opponents," Kamenec said. "And we tend to forget that, and the whole issue is reduced just to the solution of the Jewish problem which was displayed, of course, in the most tragic and most expressive way. On the other hand, had the regime not been totalitarian with fascist elements, such a solution to the Jewish problem would never have occurred, naturally."

Due to forced deportations to extermination camps, two-thirds of the Jewish population died. According to Kamenec, Slovakia was the only state in all of Europe that started deportations of Jews in the first phase, in 1942, even before the German occupation - not as an annexed country, but with its own administrative forces.

Elsewhere, deportations took place only after the country was occupied.

"This is a very troublesome precedent," Kamenec said.

Hitler's statement from August 30, 1942, is famous: "We have to wipe out Jews, as they pull the strings, otherwise nothing can help us. It is interesting how this little Catholic priest Tiso sends us Jews."

After the war, in December 1946, Tiso was put on trial. He stood in the dock with former Interior Minister Alexander Mach. A journalist then working for the magazine Bojovník, Alexander Bachnár, witnessed the trial and described the atmosphere.

"Alexander Mach helped convict Tiso," he told The Slovak Spectator. "Tiso made various excuses and Alexander Mach, who addressed him as 'Mr. President' even in the dock, corrected him - Mr. President, it was not this way, but that way. The ex-Minister showed regret for some of his deeds, in contrast to the ex-President, and called the persecution of Jews and the relation to Czechs big mistakes."

Tiso was finally sentenced to death and in April 1947 executed. Alexander Mach was sentenced to 30 years in prison. After 23 years, he was released. He died in October 1980.

Kamenec has received numerous anonymous threats because of his work as a historian and because he published books about the wartime state and Tiso himself (including Tragédia politika, kňaza a človeka / The Tragedy of a politician, priest and a human: Dr. Jozef Tiso 1887-1947). He says it is bothersome to get the poison-pen letters but there is no chance that he could give up his work because of them.

"The authors of these letters are in no case a representative sample of our society," he said.

They write in the threats that he should be hanged, and sometimes the writers even try to be funny, Kamenec said.

"For example, one of them signed the letter as Jozef Tiso and the text read: 'You have also made mistakes in my biography. Come join me as soon as possible, so that I can explain them to you.'"