From a family of artists

AS A child, Peter Berger loved music, but never thought he'd be an opera singer.
Now the 28-year-old tenor from Košice is one of the most in-demand singers in the country. With his thick dark hair, commanding stage presence, and clarion high notes, some are calling him the next Peter Dvorský, Slovakia's most famous opera singer of the past 30 years. 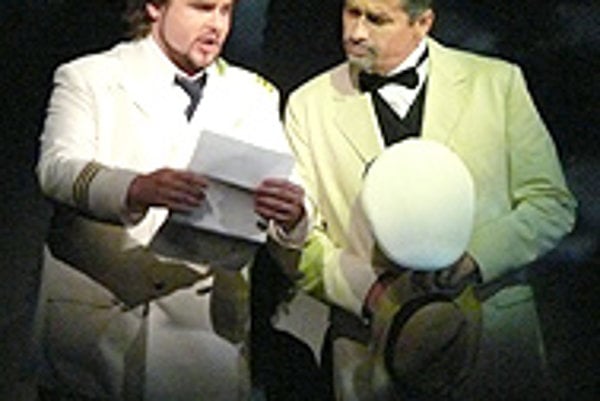 Now the 28-year-old tenor from Košice is one of the most in-demand singers in the country. With his thick dark hair, commanding stage presence, and clarion high notes, some are calling him the next Peter Dvorský, Slovakia's most famous opera singer of the past 30 years.

Berger began his career at the Košice State Theatre, winning rave reviews for his musicality and acting skills as Nemorino in Donizetti's L'elisir d'amore and the title role in Faust by Gounod.

And earlier this month, he made his highly anticipated debut at the Slovak National Theatre (SND), starring as Pinkerton in Peter Konwitschny's production of Puccini's Madama Butterfly.

"I had only seen the SND on television until then," Berger told The Slovak Spectator. "So to sing in it with a full audience was indescribable."

A childhood of music

Berger grew up surrounded by art. His paternal siblings are professional musicians abroad and his great aunt sang in a chorus. Both his parents are avid photographers.

"Music, theatre, and operettas were part of my family's 'daily menu'," Berger said. "So I sang at family celebrations and in my church chorus. But when it came time to apply to elementary school, I went for one that put me on track for university, not conservatory."

But by the time he finished secondary school in 1998, Berger had decided to study singing.

"I was definitely influenced by what I saw around me," he said. "But these days, music is my life, and I would never change that. I thank God for the gift of music and wonder sometimes what shape the world would be in without Bach, Handel, Mozart, and Beethoven."

In 1998, Berger entered the Košice conservatory and studied under tenor Juraj Šomorjai. It was around this time that he met the two people who would play central roles in his early artistic development - pianist Júlia Grejtáková and professor Eva Blahová.

"A true teacher is someone who stands by you every day," Berger said. "Júlia Grejtáková was one of those people. She has given me so much of her time, and always been so warm and sacrificing. She still plays for me at concerts and various musical productions.

"And it was Eva Blahová who anchored me in the basics and completely expanded my horizons, as far as technique and interpreting roles," Berger continued.

Berger has learned that the vocal cords are delicate muscles that require a balance of rigorous training and rest, he said.

"I don't want to push too much too early," Berger said. "That's why I like roles like Nemorino, which requires lightness and agility. I want my voice to have longevity and stay pleasing to the ear."

Larry Newland, an American conductor who's worked extensively with both the Košice State Philharmonic and Košice State Theatre over the past few years, immediately singled Berger out for his voice and musicality.

"He's got a nice lyricism and a real Italianate quality in his sound," Newland told the Spectator. "He can even do some heavier roles when they really fit, like the Prince in [Dvořák's] Rusalka. He's definitely popular with the audiences in Košice."

Debut at the SND

Berger earned the opportunity to debut at the SND through an invitation from Peter Mikuláš, the director of the SND Opera at the time.

"When I finished my audition, Mikuláš offered me the role of Pinkerton in Madama Butterfly, which would premiere the next season," Berger said. "I was happy, but I resisted for a while. I guess I didn't feel I was ready. But after talking to my teachers, I decided to do it."

Soon after, the SND Opera hired a new director, Oliver Dohnányi, and Berger had to audition again. The result was the same.

"He's a superlative musician and actor and always came musically well-prepared," Dohnányi told the Spectator. "It was immediately obvious that he's a very promising singer."

With the role finally secured, Berger began training his voice for it and perfecting the interpretation.

"It was very challenging and incredibly inspiring," Berger said.

The rehearsals for Madama Butterfly lasted six weeks, during which Berger says he learned volumes from Dohnányi, the production's renowned director, Peter Konwitschny, and his fellow singers at the SND.

"I just kept saying to myself, 'This is the cream of the crop at the most prestigious theatre in the country. I have to give it my all'," Berger said. "I hope and believe that I did."

Berger finally debuted on October 6 in the SND's second premiere of Madama Butterfly.

"I have to admit it's hard to describe the experience," Berger said, "because it all went by like a flash."

The reaction from the public has been resoundingly positive. On October 8, the Sme daily published a review of the second premiere in which it called Berger the "young tenor from Košice with a rich metallic lustre".

Berger said his plans for the immediate future don't involve any major performances or concert tours around the world.

"I'm being cautious right now," he said. "I realise I'm still young and need a lot more experience, so I'm getting ready for my debut at the National Theatre in Prague, which is really exciting. But my voice, and all those given to professional singers, are giant gifts from God, so right now I spend a lot of time just being thankful."

Peter Berger's next performances are in Madama Butterfly on November 3 at the new SND and in Faust on November 27 at the Košice State Theatre.