Jureňa lets off steam in a cowshed

MIROSLAV Jureňa became the first minister to be sacked since Prime Minister Robert Fico formed his ruling coalition with the Movement for a Democratic Slovakia (HZDS) and the Slovak National Party (SNS) in 2006. 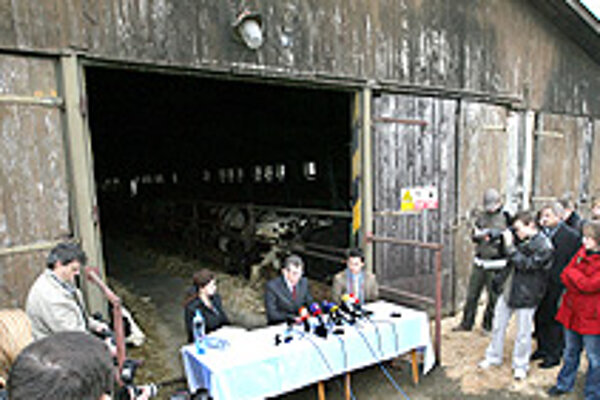 MIROSLAV Jureňa became the first minister to be sacked since Prime Minister Robert Fico formed his ruling coalition with the Movement for a Democratic Slovakia (HZDS) and the Slovak National Party (SNS) in 2006.

The HZDS and its chairman, Vladimír Mečiar, found it difficult to swallow the loss of its nominee and tensions within the Fico-made coalition came near the breaking point.

Jureňa also had an emotional reaction to his dismissal, for what Fico called a political responsibility for the deals at the heart of the land transfer scandal. The outgoing agriculture minister summoned a press conference in a cowshed in the Bratislava district of Vajnory.

“One of the reasons I went to a cowshed, and took my desk there, was that I would not bang on the desk in the office,” Jureňa told the private Markíza TV station, explaining the rather unusual scenery for the press conference. “I grew up in a cowshed, and I wish to repeat the Biblical phrase here – ashes to ashes, dust to dust.”

However, Jureňa was not just being metaphorical about banging on his desk in a cowshed. He did bang on the table while criticising his former boss for the firing, accusing Fico of using a double standard for ministers from his Smer party when it comes to holding them responsible for scandals.

“If we talk about transparency and clarity, why has he not applied the same principle to the interior minister for the case of Hedviga Malinová, which is still unsolved?” Jureňa shouted at the shocked journalists. “Why does Mr. Prime Minister not apply the same measures to my colleague, or rather ex-colleague, (Labour Minister Viera) Tomanová?

“Why does he not take the same measure in connection with the defense minister when it comes to people who died in Nováky because some safety rules were broken?”

Malinová is an ethnic Hungarian student whose alleged attack last August brought tensions to Slovak-Hungarian relations, but Slovak police have not yet managed to solve the case. Tomanová survived a non-confidence motion after her former employer, the Privilégium non-governmental organisation, got a hefty subsidy from her ministry based on misleading information, according to the Sme daily.

A fatal explosion at an ammunition factory owned by the Defense Ministry, VOP Nováky, earlier this year was partly caused by safety violations at the factory, an investigation showed.

“I am urging Robert Fico to act and to stop this deception of us, all Slovaks,” said an irritated Jureňa, the SITA newswire wrote.

Jureňa has since kept criticising Fico through other media. In a political debate on the private JOJ television station on November 25, he accused Fico of manipulating public opinion.

“It is as if we tried to pack the parliamentary system into a single central committee, into one ideological secretary, into one manipulator of public opinion,” he said.

Fico said he saw Jureňa’s resignation as the only way out of the ruling coalition crisis that followed the land transfer scandal. It was sparked by a deal in the Slovak Land Fund (SPF) involving land plots worth about Sk1.5 billion (€45.4 million) lucrative High Tatras area. The plots were sold for Sk13 million to GVM, a company close to Mečiar, the Sme daily reported.

The deputy head of the fund, Branislav Bríza, cultivated the deal and signed the contract that transferred the land back to the former owners under the restitution law, and the owner promptly sold the land to the company.

Bríza, an HZDS nominee, announced his resignation on November 15, but Fico said more needed to be done, because he did not want to allow any suspicions that he was involved in shady deals.

According to Smer vice-chair Marek Maďarič, Jureňa’s dismissal sent a message to the HZDS that the practices of the 1990s would not be tolerated. There were many suspected cases of corruption and economic fraud during the Mečiar regime at the time, he said.

Maďarič also mentioned the eight-year isolation in which the HZDS found itself after it lost power in 1998, and said only the current coalition freed it from obscurity.

Several HZDS members called Jureňa’s ouster a harsh violation of the ruling coalition agreement. But after its emotional reaction to the sacking, the HZDS held a long board meeting the night of November 23 and announced that it would stay in the ruling coalition for the time being.

Jureňa’s firing reflects the mood in the coalition, where Fico is trying to prove his dominance, political analyst Samuel Abrahám told The Slovak Spectator.

Abrahám said he doubts that Fico chose a principled fight against corruption, and that Jureňa became a scapegoat by a rather random selection.

“Robert Fico perhaps felt that he might gracefully and definitely eliminate Mečiar – his rival who is older by a whole generation, who has a similar explosive style and similar voter base,” Abrahám said.

“They are just too similar to get along together well for a longer time.”

If Fico really wanted to eliminate corruption, he could have done it sooner, Abrahám added.

On July 2, opposition MPs conducted an audit at the SPF that revealed some non-transparent land transfers.

“If Fico had wanted to stick to high principles, he would have acted in July,” Abrahám said. “But he had not said a word, although he knew that such things happened at the SPF.

“But Jureňa’s dismissal is fully justified.”

The chairman of the opposition Slovak Democratic and Christian Union (SDKÚ), Mikuláš Dzurinda, said Fico’s Smer was fully responsible for the land deals in question, because it nominated most of the management of the SPF.

“Smer managed these scandalous transactions, and Smer bears most of the political responsibility for what happened in the land fund,” Dzurinda said at a press conference on November 27.

Fico waged a counter-attack through his spokeswoman Silvia Glendová. She told media that the government nominated the SPF management in January, but Jureňa designated new members of the SPF supervisory bodies in May.

Before that, Bríza signed “a whole range of scandalous contracts in April,” Glendová said.

Fico promised a press conference that the government would prepare changes in the way the SPF functions, which should prevent such questionable land transfers in the future.

The opposition parties have considered filing a proposal to oust Fico. The proposal for a non-confidence vote against Fico was supported by Dzurinda’s SDKÚ and the ethnic-Hungarian SMK.

The opposition was expected to submit its proposal to the parliament by the end of November.

To recall the prime minister, which would mean the collapse of the government, the opposition would need at least 76 of the total of 150 MPs. However, it has only 65 chairs in the parliament.

The Prosecutor General’s Office has started investigating the case of the land transfers.

Jureňa has been replaced by another HZDS nominee, Zdenka Kramplová, a long-time aide of Mečiar. She was appointed to the position on November 27.